(Richmond, VA) – Hardywood Park Craft Brewery is ecstatic to announce it has secured a site in Goochland County, Virginia as the future home of Hardywood West, a destination brewery campus. The 24 acre plot in West Creek Business Park sits along Tuckahoe Creek, providing phenomenal views of the lush Virginia landscape. The new campus, which will be built in phases, will accommodate brewing and packaging facilities, a taproom and beer garden, agricultural fields, a food truck plaza, bocce courts, a natural amphitheater for live performances and walking paths connecting to a planned creekside trail system. 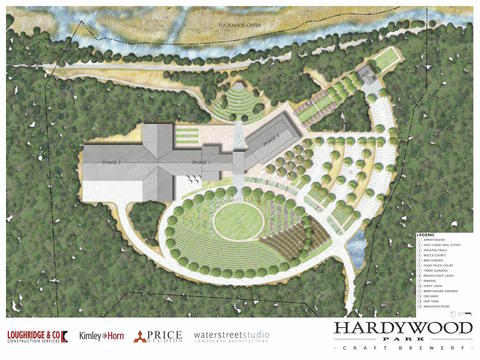 Hardywood president and cofounder Eric McKay said, “our vision has always been to provide an exceptional work environment for our team members, sufficient scale to keep pace with demand and sustain competitive forces, and a truly unique visitor experience. We’re thrilled to be able to accomplish all of that with this new facility.”

Averaging 100% growth per year since opening in 2011, Hardywood is on track to brew 15,000 barrels in 2015, and is rapidly nearing capacity. A custom, 60-barrel brewhouse and state of the art packaging equipment will allow Hardywood to increase initial capacity to more than 40,000 barrels per year, enabling expanded distribution beyond Virginia’s borders. Hardywood’s current headquarters, 13 miles east of West Creek in the City of Richmond, will continue to operate as a taproom and community events space, while brewing in the City will shift more toward research and development projects. 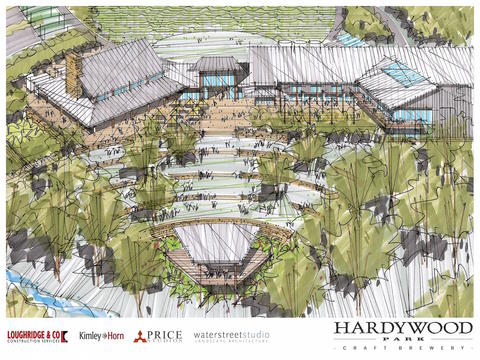 “Sophisticated instrumentation and better process control on our new brewing system will elevate our quality assurance and consistency to world class levels, delivering more value to our customers, and hopefully earning their loyalty,” explained brewmaster and cofounder Patrick Murtaugh. “At the same time, opening the new facility will enable us to dedicate our 20-barrel brewery in the City of Richmond entirely to creative brewing, experimentation and collaboration,” Murtaugh continued, “which are hallmarks of our brewing team that have driven the national recognition of the Hardywood brand.”

Hardywood explored dozens of site options throughout central Virginia and North Carolina, but selected the West Creek location in Goochland County because of its balance of industrial utilities, highway access, proximity to a growing population of young professionals and an idyllic setting with ample space for growth.

Hardywood will create 56 jobs at the new location and will bring more than $28 million in private investment to Goochland County with the multi-phase project. The largest purchaser of Virginia agricultural products in the brewing industry, Hardywood will be able to further develop its numerous partnerships with local farmers and artisans through its expansion. The project was made possible through the support of the Agriculture and Forestry Industries Development Fund, the Virginia Investment Partnership Grant and the Commonwealth’s Opportunity Fund, with matching support from Goochland County.

Speaking at the economic development announcement today in West Creek, Virginia Governor Terry McAuliffe said, “Hardywood has built a strong reputation for their award-winning beers and the integrity of their ingredients and business practices. I am thrilled to help them launch a new chapter in their business’s growth. Craft beer is an integral part of my plan to build a new Virginia economy, and Virginia is quickly becoming the most significant player in the craft beverage industry on the East Coast. Investments like this create jobs, tourism opportunities, and markets for Virginia’s farmers.”

The first phase of the project, consisting of a brewery, packaging hall and beer garden, is scheduled to open by the spring of 2017. The facility will retain Hardywood’s commitment to utilizing 100% renewable energy through solar, biomass and wind to power the brewery. Irrigation water will come from a rainwater retention system, natural light will be used extensively within the brewery, wood timbered for site grading will be reused in building out the taproom and ultra high efficiency equipment, mechanical systems and lighting will be employed.

About Hardywood Park Craft Brewery:
Founded in Richmond, Virginia by lifelong friends, Hardywood has been soulfully brewing beer since 2011. Sourcing 100% of its power from renewables, including solar, biomass and wind, Hardywood is committed to minimizing its impact on the environment. Hardywood’s beers have earned international acclaim with medals at the World Beer Cup and Great American Beer Festival, a rare 100 rating by BeerAdvocate Magazine, was rated Virginia’s Top Brewery by RateBeer.com users and was recognized as Virginia’s Best Brewery by Thrillist.com. The company was awarded the Greater Richmond Chamber Business Council Business of the Year Award in 2013. Hardywood currently distributes throughout Virginia, Washington, D.C. and eastern Pennsylvania. Learn more about Hardywood at www.hardywood.com.