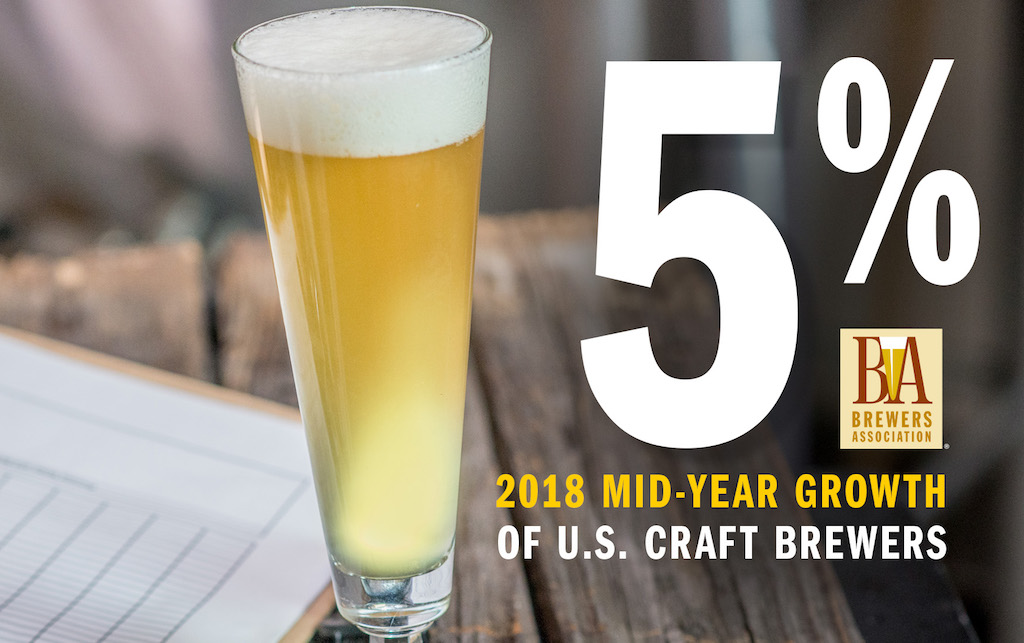 “While more mature, the market continues to show demand for small and independent craft brewers,” said Bart Watson, chief economist, Brewers Association. “There are certainly industry headwinds, but this stabilized growth rate is reflective of the market realities that exist for brewers today.”

As of June 30, there were 6,655 active breweries, up from 5,562 during a comparable timeframe last year. An estimated 2,500 to 3,000 breweries are in planning, based on active Alcohol and Tobacco Tax and Trade Bureau (TTB) licenses.

“The data demonstrate that 2018 is on pace to have the highest number of brewery openings and closings to date. However, even as breweries close, openings continue to far outpace the number that shutter,” added Watson. “New players looking to enter the space should be aware of the constructs of the current landscape, work to differentiate themselves and will need to make quality beer to succeed.”

Craft brewer definition: An American craft brewer is small, independent and traditional. Small: Annual production of 6 million barrels of beer or less (approximately three percent of U.S. annual sales). Beer production is attributed to the rules of alternating proprietorships. Independent: Less than 25 percent of the craft brewery is owned or controlled (or equivalent economic interest) by an alcoholic beverage industry member that is not itself a craft brewer. Traditional: A brewer that has a majority of its total beverage alcohol volume in beers whose flavor derives from traditional or innovative brewing ingredients and their fermentation. Flavored malt beverages (FMBs) are not considered beers.

The Brewers Association (BA) is the not-for-profit trade association dedicated to small and independent American brewers, their beers and the community of brewing enthusiasts. The BA represents 4,800-plus U.S. breweries. The BA’s independent craft brewer seal is a widely adopted symbol that differentiates beers by small and independent craft brewers. The BA organizes events including the World Beer Cup®, Great American Beer Festival®, Craft Brewers Conference® & BrewExpo America®, SAVORTM: An American Craft Beer & Food Experience, Homebrew ConTM, National Homebrew Competition and American Craft Beer Week®. The BA publishes The New Brewer® magazine, and Brewers PublicationsTM is the leading publisher of brewing literature in the U.S. Beer lovers are invited to learn more about the dynamic world of craft beer at CraftBeer.com® and about homebrewing via the BA’s American Homebrewers Association® and the free Brew Guru® mobile app. Follow us on Facebook, Twitter and Instagram.