(San Diego, CA) – After hosting 15th anniversary celebrations at breweries on both coasts, Green Flash Brewing Co. reveals plans for 2018. Drawing on their legacy as an IPA powerhouse, Green Flash introduces Remix IPA – a new IPA showcasing old-school hops and a modern IPA flavor profile. It offers craft beer consumers the hop-character and quality they have come to expect from the brewery that trademarked West Coast IPA. Remix IPA is 6.2% ABV, and will be available nationwide on draft, in 6-packs of 12oz cans, and in 19.2oz single-serve cans. As the brewery refines their packaged beer assortment, Remix IPA is the only new packaged beer offering that will join the robust Green Flash portfolio. The brewery will also focus on new national draft beer offerings, with four innovative seasonal releases scheduled to debut throughout 2018. 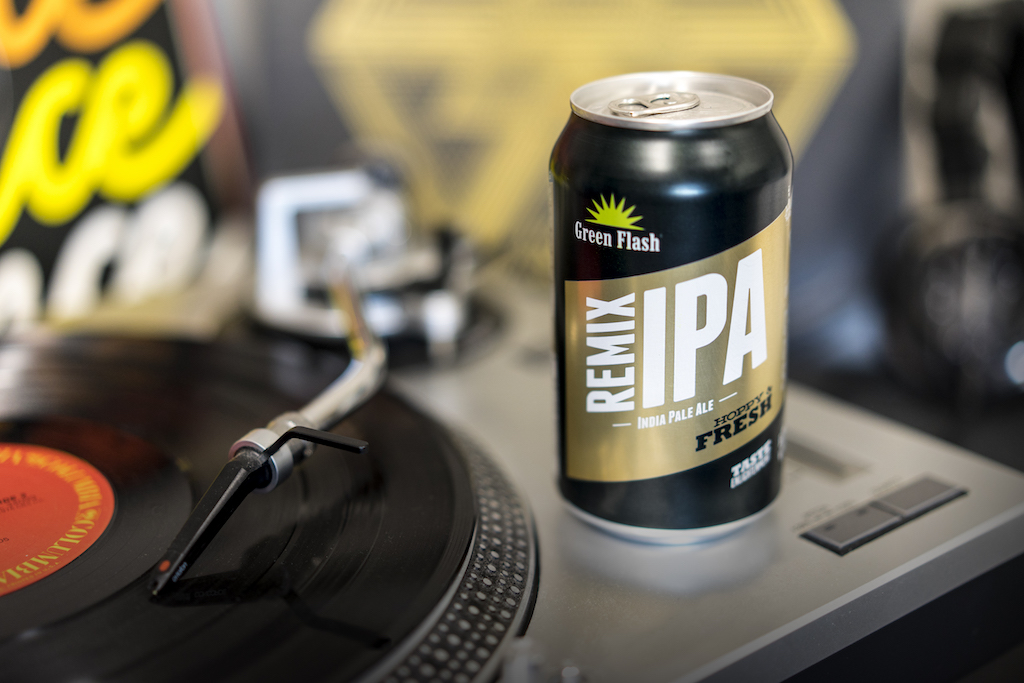 “Remix IPA is an extremely exciting new single IPA release for Green Flash,” says Mike Hinkley, Green Flash Brewing Co. Co-Founder and CEO. “Our brewers are taking the skills learned over the past 15 years of brewing awesome IPAs to create the next iconic front-line beer in the Green Flash portfolio.”

Remix IPA features piney and dank flavors from Green Flash’s “legacy hops” – Cascade, Columbus and Summit. The metallic gold packaging offers a dynamic brand story that draws a parallel between hip hop DJs and the Green Flash brewers – suggesting that the brewing team is skillfully remastering both ingredients and process to create the brand’s next big hit. Last year, Green Flash introduced their Blonde Ale, GFB in 19.2oz single-serve cans, a move that has multiplied their presence in national convenience store chains. Seeking to expand on this success, the brand will offer Remix IPA in both 12oz 6-packs and 19.2oz single-serve cans. Remix IPA will be priced in line with their GFB Blonde Ale.

“We love West Coast IPA, so we decided to come up with a beer that echoes its best attributes with a lower ABV and lighter color and body,” explains Brewmaster, Erik Jensen. “Remix IPA is not quite as hoppy as our flagship brew, but it is unmistakably a world-class Green Flash IPA. It will definitely be my go-to beer next year.”

Harnessing the talents of their brewers in San Diego and Virginia Beach, the 2018 draft lineup will include original beers inspired by pilot-brew releases from company’s Genius Lab and research and development programs. The Genius Lab initiative encourages brewers and staff from all areas of the organization to submit and develop beer recipes which are then served in the tasting rooms. The forthcoming national draft releases include four of their most successful small-batch brews including the winter release of CaCow Milk Stout (6.3% ABV), spring-summer release of The Wit is It – a Belgian-style White Ale (4.8% ABV), the Fall release of the brewery’s annual Treasure Chest IPA (7% ABV) – this year’s offering is an inventive IPA brewed with unique yeast strain. Still in development is a Genius Lab-inspired 16th Anniversary brew which will release nationwide on draft at the end of 2018.

“We are currently focused on reducing overall SKU count while expanding distribution of core brands as well as amplifying our brand’s impact in key regions,” explains Chris Ross, Green Flash President and COO. “As we near completion of our Lincoln, Nebraska brewhouse and restaurant, we are continuing our search for opportunities to expand. We look forward to opening upwards of four new outposts in cities across the country over the next 2 years.”

Green Flash Brewing Co. is headquartered in San Diego, California, and was established in 2002 by co-founders Mike and Lisa Hinkley. Brewmaster, Erik Jensen, leads brewing operations. Green Flash is an award-winning brewer of fine, craft ales, and specializes in brewing assertive and distinctive beers, such as nationally acclaimed West Coast IPA: an award-winning beer whose wide acceptance has helped define a category. In 2016, Green Flash opened a full-scale brewing facility in Virginia Beach, VA and all Green Flash beers are available nationwide. Green Flash is available in bottles and on draft nationally – offerings include a growing lineup of seasonal and limited release ales, including several barrel-aged beers from their Cellar 3 series. Please visit the Green Flash website www.greenflashbrew.com for more information.