(Denver, Colorado) – Two years after buying a five acre space in Denver’s River North neighborhood, Great Divide Brewing is officially opening the doors of its new Barrel Bar on Friday, July 31st at 12pm. The Barrel Bar, located across the street from The Source at 35th & Brighton Boulevard, is a small 30-40 person taproom with capacity for up to 100 with patio space. The location is set along the South Platte River, right next to what will soon be a new City of Denver park, with picturesque views of the Rocky Mountains and the Denver cityscape. 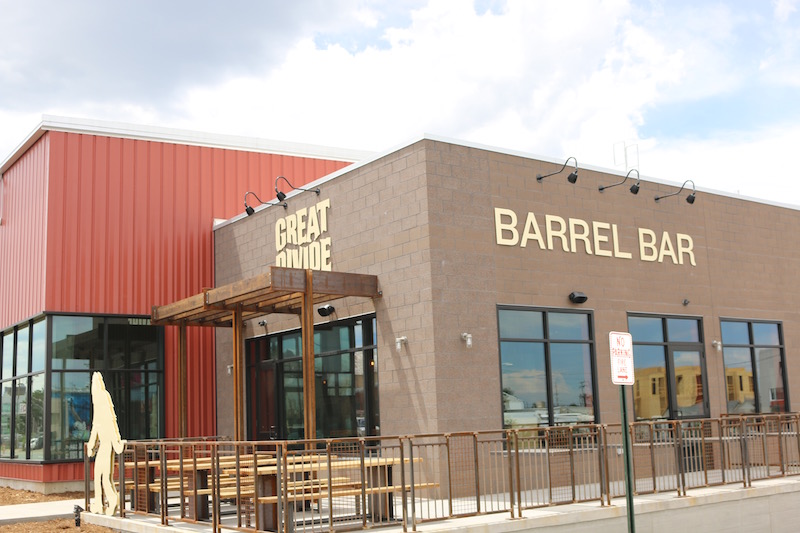 After 21 years, the brewery is quickly running out of space to grow in its original Ball Park location at 22nd and Arapahoe. “We are a Denver brewery, and have been involved in the craft beer scene and the community here since the beginning. When it came time to find a space to expand our brewery, leaving Denver was never an option. It wasn’t easy, but we are so happy to have found a place only a mile down the road where we can continue growing for the next 21 years.” –Brian Dunn, Great Divide Founder and President, explains of the reasoning behind having two Denver locations.

The first phase of the brewery’s expansion is a 65,000 square foot building which includes the Barrel Bar, a new packaging facility with a state-of-the-art KHS canning line, warehouse space, and room to store 1500 barrels between the barrel aging room and a negatively pressurized sour room. The second phase is anticipated to commence early in 2016 and will include a new brewery, a larger taproom, a beer garden, and restaurant.

The Grand Opening of the Barrel Bar will feature tours of the new canning line and packaging facility as well as limited offerings of some specialty and barrel aged beers. Starting Friday, the Barrel Bar will be open Sunday-Tuesday 12pm-8pm and Wednesday–Saturday 12pm-10pm. Tours will be offered daily on the hour Monday–Friday 3pm-5pm, and Saturdays and Sundays 2pm-6pm. Tours are free and open to the public, no reservations required. The Barrel Bar will feature the full line-up of Great Divide beers, along with rotating specialty taps including nitro, barrel aged, and pilot system offerings. Packaged beers and Crowler fills will also be available.

“We have been an active part of the growth and development of the Ball Park neighborhood and we’re excited to be equally involved in the future of RiNo. The neighborhood has already changed a lot since we made the decision to make our second home there, and we’re really excited about what’s to come.”—Brian Dunn.