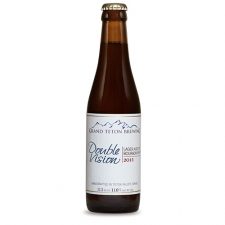 Barrel-Aged Double Vision Doppelbock boasts cocoa, dark fruits, chocolate and subtle coffee notes from the heavy dark and roasted malt bill. This is a strong beer, full of flavors and aromas hidden deep within its many layers, making it the ideal candidate to sip slowly as the beer’s temperature rises. For the full experience, pour this beer into a snifter, tulip or wine glass and hold it in the palm of your hand to help warm the beer, releasing all the hidden flavors and aromas.

Barrel-Aged Double Vision Doppelbock will be available as a one-time release February 15, 2017 in 11.2 ounce bottles and 1/6 bbl kegs.