(OAKLAND PARK, FL) – Get ready to put your feet in the sand with a beer in your hand: Pineapple Beach, a tropical and refreshing blonde ale kissed with gnarly waves of juicy pineapple, is arriving next month in six-pack, 12-ounce bottles! This newest addition to Funky Buddha’s year-round lineup will be available on February 1st at major retailers throughout Florida for a suggested retail price of $9.99. 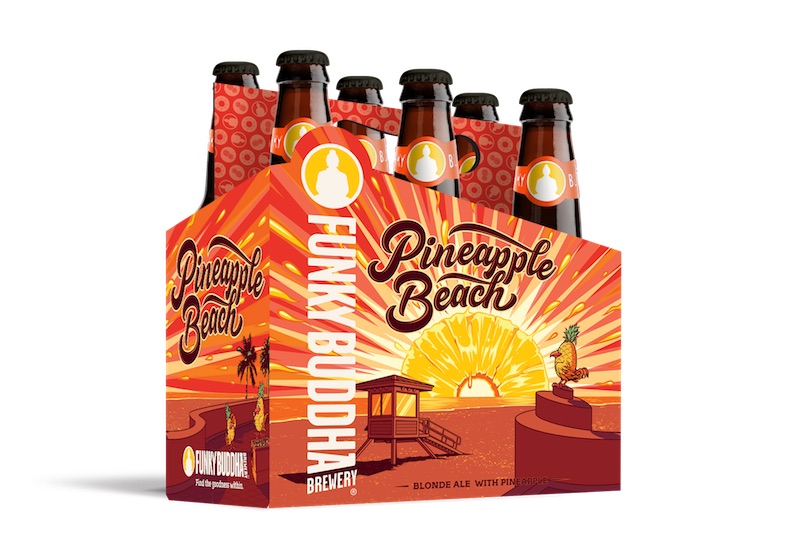 Pineapple Beach will be the first new year-round offering from Funky Buddha Brewery since early 2016. This tasty blonde ale is made with pilsner malt and a touch of wheat for a crisp, light body. A dose of citra hops add a floral, heady aroma and dry finish, while just enough real pineapple is added to capture the tropical vibe without making the beer overly sweet or fruity.

“Pineapple Beach fills a demand that we’re seeing for sessionable beers that appeal to a broad range of craft consumers,” says KC Sentz, co-owner and general manager of Funky Buddha Brewery. “It’s easy-drinking but flavorful, which is exactly what our customers have been asking for.”

The launch of this new, year-round beer kicks off a big 2017 for Funky Buddha. The brewery plans to begin a new expansion this year that will see it’s capacity and size grow significantly, allowing its beers to be sold out of the state of Florida for the first time. Other 2017 releases will include an expanded portfolio of it’s “Little Buddha Small Batch” line of beers and an expanded barrel-aging program that will produce over 500 BBLs of highly sought after brands this year.

For more details on Pineapple Beach and where to find it, please visit funkybuddhabrewery.com.