(FORT COLLINS, CO) – Funkwerks will be releasing Apricot Provincial for their spring seasonal. Available in 4-packs of 330ml bottles, Apricot Provincial will hit liquor stores shelves in Colorado, Iowa, and Arizona by early March, and Northern Texas by late March. 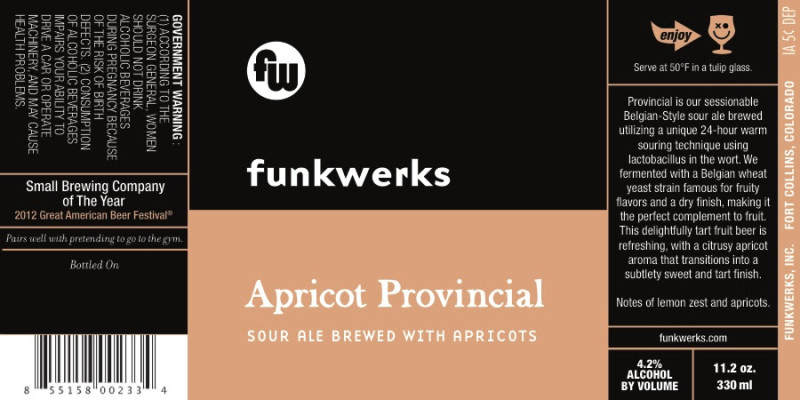 Apricot Provincial is a sessionable Belgian-Style sour ale, at 4.2% ABV. It was brewed utilizing a unique souring technique using lactobacillus in the wort. Fermented with a Belgian wheat yeast strain famous for fruity flavors and a dry finish, making it the perfect complement to fruit. This delightfully tart fruit beer is refreshing, with a citrusy apricot aroma that transitions into a subtlety sweet and tart finish.

“Apricot Provincial is the perfect beer to bring in the spring season because of its light citrus notes with delightful apricot notes,” explains Gordon Schuck, Co-Founder and head-brewer. Apricot Provincial will be the second seasonal release in 4-packs.

Funkwerks started bottling in 330ml bottles last year. Brad Lincoln, co-founder explains, “people tend to save larger bottles of beer for a special occasion or to share with others, or heavier beers that are enjoyable to sip.” Smaller bottles provide more variety, accessibility, and the convenience of enjoying a single beer without the commitment of a larger bottle.

Now you can look forward to drinking a refreshing Apricot Provincial on a bright spring day.

The Funkwerks Story:
In 2007 Gordon Schuck’s recipe design and brewing skills resulted in a gold medal-winning Saison at the National Homebrew Competition. Brad Lincoln first experienced craft beer while working as an accountant in Portland, OR. The two met during the winter of 2009 while attending the Siebel Institute and studying brewing science. After being immersed in beer for the better part of five months, the two graduated and shared a desire to open a brewery. This resulted in the Saison-focused brewery that is now Funkwerks, opened on December 9, 2010. Funkwerks’ four mainline beers, Saison, Tropic King, Raspberry Provincial and Nelson Sauvin are produced year-round. Also brewed annually are four seasonals, a number of small experimental batches, and select barrel-aged releases. Funkwerks flagship Saison was awarded a gold medal at the 2012 Great American Beer Festival (GABF) and a silver medal in 2011. Deceit, a Belgian-Style golden strong ale, was also awarded a gold medal at the GABF in 2012 and a Silver at the World Beer Cup in 2014. In addition to receiving two gold medals in 2012, the GABF named Funkwerks the 2012 Small Brewing Company of the Year. The latest gold medal was awarded to Raspberry Provincial at the 2014 GABF. Funkwerks is located at 1900 East Lincoln Avenue in Fort Collins, Colorado. The tasting room is open 7 days a week: Sunday 11am-8pm; Monday through Thursday 11am-8pm; Friday 11am-9pm; and Saturday 11am-9pm. Brewery tours are given Saturdays at 2pm, 3pm and 4pm. Funkwerks is currently distributed in Colorado by C.R. Goodman, in Arizona by the Hensley Beverage Company, in Dallas and Fort Worth by Andrews Distributing, and in Iowa by Johnson Brothers Distributing Company.