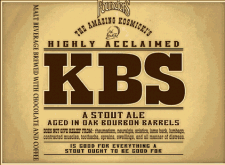 This is not a parody 😉 Founders Brewing, once again, reacts to criticism over last weeks KBS release.  In my opinion, this is great customer service, and a way to keep goodwill with their locals. Cheers!

We wanted to reach back out to everyone about this past weekend’s KBS release event. We first want to thank those of you who took the time to give us valuable constructive criticism; we’ve spent the better part of the week sorting through each and every one of your emailed suggestions. The passion, both positive and negative, in your well-thought-out communications is a testament to how lucky we are to be in the beer community.

We are making a dramatic improvement on organization, efficiency, and communication plans for our future releases so that everyone involved can enjoy the true spirit of the experience. It would be misleading to say that everyone will get an allocation of KBS next year, but we can assure you that we are producing approximately three times the volume for the 2013 release. However, with the demand for this beer, reduced allocations will still be in place at next year’s event.

One overwhelming piece of advice that we received was to go to a pre-sale ticketed lottery system. We have a plan to implement such a system in a way that will benefit both event attendees and a charity that the brewery believes in. The entire day will be reworked to ensure that access to KBS, in bottles and on tap, will be clearly communicated, in order to better accommodate more beer enthusiasts. We’re excited to share these details when we announce our next release.

In looking back at last weekend, we find success in the lessons we’ve learned. We’re confident that our future release events will be a blast to those that come out to visit the brewery. Our ultimate goal is to make some of the country’s best beers, and much of the fun lies in sharing it with the extended Founders Family, which is made up of beer enthusiasts like you.

Thanks for all of your support; we are humbled and grateful for all of the advice received over the past week.