(Fort Collins, CO) – On August 25th, Fort Collins Brewery (FCB) will be releasing the third installment of their Hybrid Series, Stout Collaborate & Listen, a collaboration brew with Verboten Brewing. “We always love collaborating with friends in our craft brew community,” said Verboten Head Brewer Josh Grenz. “We count FCB as good friends and a staple brewery. We both make high quality consistent beers, so it was fun to come up with something together.” This continuation of the Hybrid Series blends two styles with inspirations drawn from FCB’s Shot Down Chocolate Stout and Verboten’s Pure Imagination Oatmeal Stout. The result, a Steam Coffee Stout. 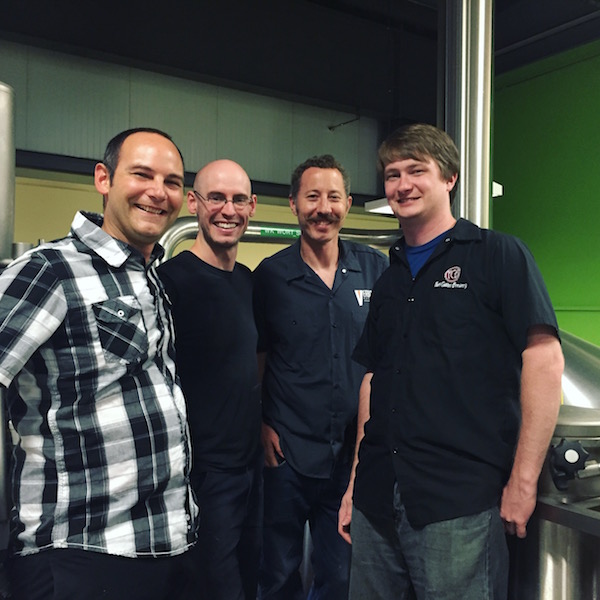 “There are several things that are unique about this beer,” said Grenz, “cocoa husks in the mash, a touch of smoke malt for the roastiness, and coffee in the fermenter.” The Dazbog coffee utilized, Grenz explains, was ground specifically to bring out the highest amount of aromatics from the coffee. Other than aromas of fresh brewed coffee, the 7.1% ABV brew also has hints of vanilla and cacao.

While Stout, Collaborate & Listen has many features of a true coffee stout, the collaboration beer is brewed without dark malts leaving the appearance significantly lighter in color and body. “The amalgamation of coffee, vanilla and cacao plays well with the steam lager yeast,” said Josh Hall, FCB’s Brand Ambassador and resident Vanilla Ice fan. “The result is a distinctly different yet drinkable beer that finishes dry but leaves a bit of coffee on the palate.”

To celebrate the release, FCB and Verboten will host dual release parties. FCB will throw a 90’s themed release on August 25th at 5pm. Guests are encouraged to show up in neon, grunge or other 90’s inspired fashion. Verboten Brewing will continue the party the next day with a toast starting at 5pm.

Stout, Collaborate & Listen will be available on draft at both Fort Collins Brewery and Verboten Brewing tasting rooms as well as at participating restaurants and bars locally. To find out more about the collaboration brew, call 970-472-1499.

About FCB: Fort Collins Brewery & Tavern is a family-owned, handcrafted microbrewery and full service tavern in Northern Colorado, established in 2003. FCB offers an outstanding lineup of 50 ales and lagers that can be found on tap as well as in bottles throughout the U.S. FCB is a 2015 GABF® Gold Medal Winner for Oktoberfest in the Dortmunder/German-Style Oktoberfest category. For more information, visit fortcollinsbrewery.com or call 970-472-1499. Brewery tours run Monday – Friday by appointment and Saturday from 12 – 4 p.m. (at the top of the hour). Create – Share – Savor

About Verboten: Verboten Brewing opened in early 2013 as a true boutique brewery featuring 16 tap handles, one nitro tap and rotating beers introduced every few weeks. The brewery uses as much seasonal and local ingredients as possible in each of their handcrafted ales, often adding their own twist to classic beer styles so that selections are new and exciting. Located in the heart of Loveland on 127 E. 5th St., the brewery maintains a “beer for all” approach, a belief that there is a beer out there that will appeal to everyone.