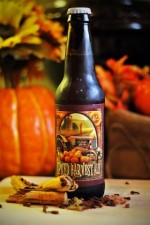 Last fall, Spiced Harvest sold out within three weeks of hitting shelves. This year, the brewery has doubled production to meet the projected demand.  A light amber color and medium bodied, Spiced Harvest is fermented with cinnamon, clove, ginger, honey and allspice.  At 6.6% ABV, this Fall Seasonal is reminiscent of pumpkin pie and was awarded the bronze medal in the Herb and Spice category at the European Beer Star competition in 2012.  Forget celebrating Thanksgiving only one day a year, with Spiced Harvest Ale you can be thankful one bottle at a time.

Casey Hollingsworth, Vice President of Sales at Fordham & Dominion, said, “You know, this was totally an experiment last year and it really stuck…our brewers were able to create a beer that brought out the flavor desired from the spices while maintaining a balance.”

This seasonal beer will be offered in six-packs and on draft.

Based on shared values and a common philosophy of quality brewing, Fordham & Dominion joined forces in 2007 and consolidated operations in 2009. The First State is now home to the Fordham & Dominion Brewing Co., where beer lovers from near and far are able to stop by, get to know us, and enjoy our handcrafted beer and soda. Our roots run deep throughout the Mid-Atlantic region and we remain dedicated to our craft. Throughout our history, we have always believed in two things: the beer we make and the people who drink it.