(Frederick, MD)  – To commemorate the 75th anniversary of OLD BAY®, Flying Dog partnered with the iconic Maryland seasoning on Dead Rise OLD BAY Summer Ale. Dead Rise is premiering on tap at the brewery Friday and available throughout the mid-Atlantic through Labor Day.

The brewers at Flying Dog worked closely with the flavor experts at OLD BAY for over six months to develop the recipe for Dead Rise. The beer begins with OLD BAY and citrus notes on the nose, which develop into citrus hop flavors and end with a crisp, tart finish. At 5.6% ABV, it will quickly take its place alongside tins of OLD BAY on tables piled high with steaming crabs this summer. 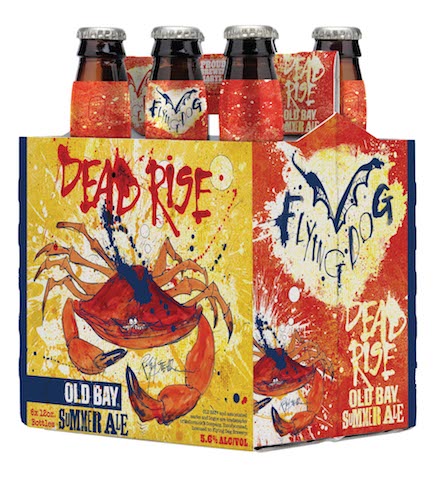 “We wanted to create something that highlights the bold character of OLD BAY through bright and refreshing citrus hop character,” Flying Dog Brewmaster Matt Brophy said. “And something that’s easy-drinking with a lower alcohol content is essential for the hot and humid summers we have here in the mid-Atlantic.”

As with all of Flying Dog beers, the legendary Gonzo artist Ralph Steadman created original art for Dead Rise, depicting a Maryland Blue Crab in his signature style of calculated chaos.

Dead Rise gets its name from boats specifically designed to navigate the unique waterways of the Chesapeake. The term describes the lines of the fishing vessel, which is still preferred by today’s watermen.

“The characteristics of a deadrise allow watermen to work in some of the Bay’s worst conditions,” Jerry Pruit, a boat builder from Tangier Island, Virginia. “The bow is V-shaped to cut through choppy water and it flattens out closer to the stern, making it navigable in shallow water.”

Flying Dog and OLD BAY will donate a portion of the proceeds from Dead Rise to True Blue, a program that advocates on behalf of the Chesapeake Bay’s 5,500 watermen and promotes sustainably harvested Maryland Blue Crab.

“OLD BAY is proud to partner with Flying Dog to offer this distinctive ale in celebration of our 75th. We can’t think of a better way to honor and help preserve the history and traditions of the Chesapeake watermen,” Jessica Schatz, brand manager for OLD BAY, said. “We’re especially excited to join together with someone that has the same love for this community.”

Now in its third year, the True Blue program created a $7 million increase in business for local crabbers in its first year alone through a restaurant certification and consumer awareness program.

“Since 2004, the number of commercial crabbers working the Bay has decreased by nearly 50 percent,” Steve Vilnit, director of fisheries marketing for the Maryland Department of Natural Resources and head of the True Blue program said. “There is a tremendous amount of pride in the Maryland Blue Crab and it’s the True Blue program’s goal to encourage restaurants and consumers to buy local to make sure that number doesn’t drop any lower.”

True Blue empowers the public to buy local through its interactive map of restaurants that serve at least 75 percent of Maryland crabmeat at marylandseafood.org.

The Chesapeake region’s crab pride comes from more than just nostalgia. Vilnit explained that in blind taste tests, Maryland Blue Crab is continuously preferred over other types of crab by chefs and consumers alike.

“Blue crabs withstand colder waters than their imported counterparts,” Vilnit said. “So, they develop more fat, which serves as insulation, but also gives the meat its identifiably rich, buttery flavor.”

To complement what is arguably the best beer to drink while picking crabs, Flying Dog teamed up with the region’s most notorious and cutting-edge chefs – including Mike Isabella, Spike Gjerde, and Bryan Voltaggio – to create The Dead Rise Cookbook.

Each of the 17 celebrity chefs were asked to get their inspiration from the Chesapeake and incorporate OLD BAY into their recipes, which include falafels with crab yogurt, grilled oysters with peaches, crab macaroni and cheese, catfish tacos, and OLD BAY peanut brittle ice cream.

Proceeds from The Dead Rise Cookbook will also benefit True Blue. The cookbook will be available mid-May through Flying Dog’s website and in the brewery gift shop.

About Flying Dog Brewery:
As one of the fastest-growing regional craft breweries in the mid-Atlantic, Flying Dog has been brewing world-class beer that pushes the confines of traditional styles for almost 25 years. Flying Dog attracts everyone from craft beer connoisseurs to those just catching the wave with up to 20 styles available at any given time and its Gonzo ties to writer Hunter S. Thompson and artist Ralph Steadman. Named the Mid-Size Craft Brewery of the Year at the 2009 Great American Beer Festival (the highest honor for its size in the United States), recent accolades for Flying Dog include its Pale Ale ranked as the #1 American Pale Ale in the U.S. by The New York Times. For more information, please visit www.flyingdogbrewery.com.