Frederick, MD – Tomorrow, Flying Dog will open its doors in a brand new way. After working with state and county legislators for nearly three years, the brewery is now able to serve beer by the glass in its tasting room. 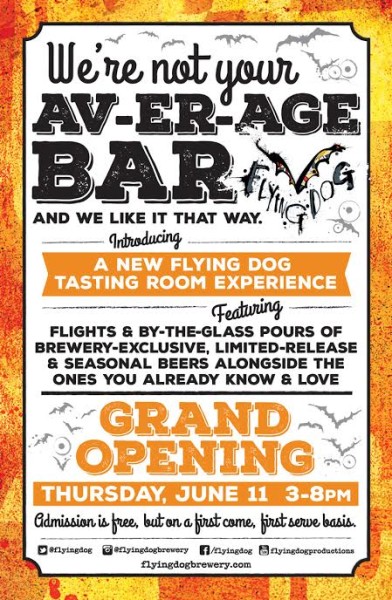 “Prior to this effort, which we could not have done without the Brewers Association of Maryland, Flying Dog was solely viewed and licensed as a manufacturing facility by the state,” CMO Ben Savage said. “And under that license, we were only allowed to serve beer samples after patrons went on a tour of the brewery.”

Flying Dog will continue to offer tours and sell flights of beer samples, but it can now serve its 20 beers on tap by the glass – thanks to an updated license that applies to all production breweries in Maryland.

The new license, and updated Maryland State laws, went into effect in July 2013. From there, each brewery had to apply for a serving permit from their local county liquor board. After over a year of working through the legal language associated with these new laws, Flying Dog received its permit from Frederick County in April of this year.

“Craft beer is all about continued innovation, so it’s really important that breweries are accessible and can share their stories and beers with audiences who are continuously hungry for it,” Savage said.

With the opening of its tasting room comes the unveiling of Sub Rosa, a series of small-batch, limited releases brewed on Flying Dog’s 15-barrel pilot brewery and available exclusively in the tasting room.

“Our pilot brewery allows us to be much more nimble than our full-fledged operations, so it’s a blank canvas for us,” Brewmaster Matt Brophy said. “We can approach it with whatever raw materials or processes we want and make something special just for our tasting room.”

For tomorrow’s opening, a Thai IPA (brewed with ginger, lemongrass, mint and basil) and an Extra Pale Ale from the Sub Rosa series will be on tap. The Baltimore-based band Solicitors will also perform starting at 5 pm.

From there, Flying Dog’s tasting room will be open Thursdays and Fridays, 3-8 pm; Saturdays, 12-8 pm; and Sundays, 12-6 pm for on and off-premise – including growler fills – beer sales. Tours of the brewery are now free and offered Thursday through Saturday by reservation through Flying Dog’s website.