(Paso Robles, CA) –  In winery circles, they often say “it takes a lot of beer to make great wine”—but the reverse is true when it comes to Firestone Walker’s annual Anniversary Ale. 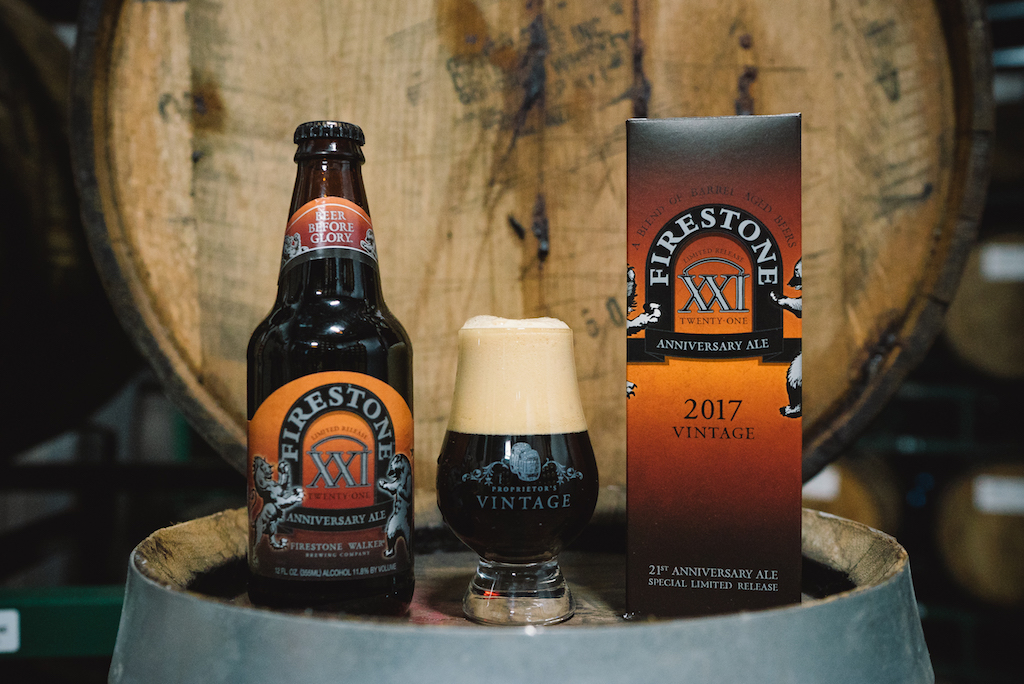 XXI will be released to all Firestone Walker markets for a limited time starting next week.

The Anniversary Ale blending session has become an annual late-summer rite at the brewery, and the 2017 session took place onAugust 22 with 27 winemakers in attendance.

“We’ve been doing this for 12 years now,” said Brewmaster Matt Brynildson. “Winemakers are practicing experts in the art of blending—I can’t think of a better way to create something synergistic from such a wide range of barrel-aged beers.”

As always, the winemakers broke into teams, and a spirited competition ensued to create the winning blend, which was voted on after a blind tasting by the entire group.

This time, the bragging rights and the coveted “cardboard crown” went to Jordan Fiorentini and Kyle Gingras of Epoch Estate Wines along with Anthony Yount of Denner Vineyards, whose three-person team conceived the blend that became XXI.

Bring On The Merkin

XXI represents the first time that Velvet Merkin has set the pace for the Anniversary Ale blend.

Another twist is the inclusion of Helldorado aged in premium Jamaican rum barrels.

“The rum Helldorado imparts notes of island spice and molasses,” Ponce said. “It adds a subtle exotic touch to the beer.”

“XXI is a magical blend of five components. Chocolatey, mild Velvet Merkin takes the lead setting the stage full of lush malt and barrel-driven texture, yet tempered alcohol strength. The rest of the components fall perfectly in line, backing Velvet Merkin up with luscious caramel complexity and a creamy malt symphony. The final component adds a new twist – the rum barrel-soaked and lean Helldorado makes its Anniversary debut, bringing a fresh splash of island spice to a ridiculously balanced barrel-aged brew. This is one of those times that the whole is truly more than the sum of its parts. This beer is unfiltered and unfined, so there will be a small amount of sediment in the bottom of the bottle. XXI is best enjoyed poured carefully into a half-filled brandy snifter or wine glass. Allow it to warm to 55F to fully enjoy the pleasing and complex aromas.”