(Paso Robles, CA) – Is it truly a farewell to Wookey Jack, Double Jack and Opal as Firestone Walker Brewing Company steels itself to stop brewing these beloved beers? 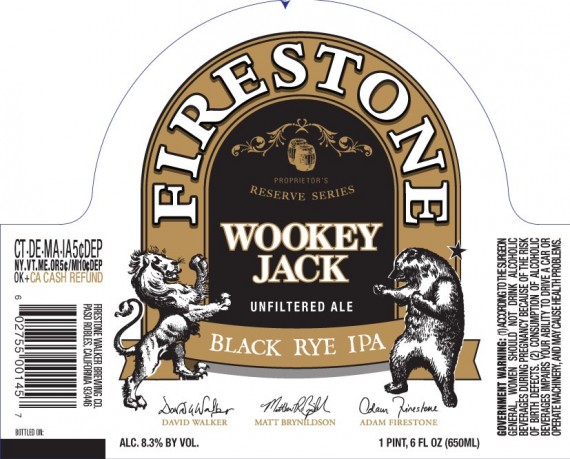 The answer is complicated, but yes, Firestone Walker’s Proprietor’s Reserve line is winding down, and the three beers referenced above will accordingly dwindle from distribution by the end of the year.

“It’s a bittersweet occasion,” said David Walker. “Each of these beers was forward-thinking and representative of some of our best brewing efforts, but they are now stepping aside to make room for the next generation.”

Added Adam Firestone, “This was a hard decision made for the sake of innovation. These beers were born of that ideal, and now they are yielding to it.”

Wookey Jack (Black Rye IPA), Double Jack (Imperial IPA) and Opal (Dry-Hopped Saison) have collectively represented the Proprietor’s Reserve Series tier for several years. This tier was dedicated to smaller-batch standout beers, and as such was aligned between Firestone Walker’s widespread Lion & Bear offerings and the limited Vintage Reserve tier of barrel-aged beers.
“The suspension of the Proprietor’s Reserve tier will create a void that the brewers here are extremely excited to fill,” said Brewmaster Matt Brynildson. “It opens up a brand new canvas. That’s all I can say for now on that.”

He added, “Wookey isn’t dead yet, and neither are the others. They may make curtain calls as special limited releases, or get reimagined into something more fantastical, or both. Our Propagator pilot brewhouse in Venice should be on line soon, and it will not only provide a platform for new R&D beers, but also for bringing back small batches of these Proprietor’s Reserve beers periodically for on-premise enjoyment.”