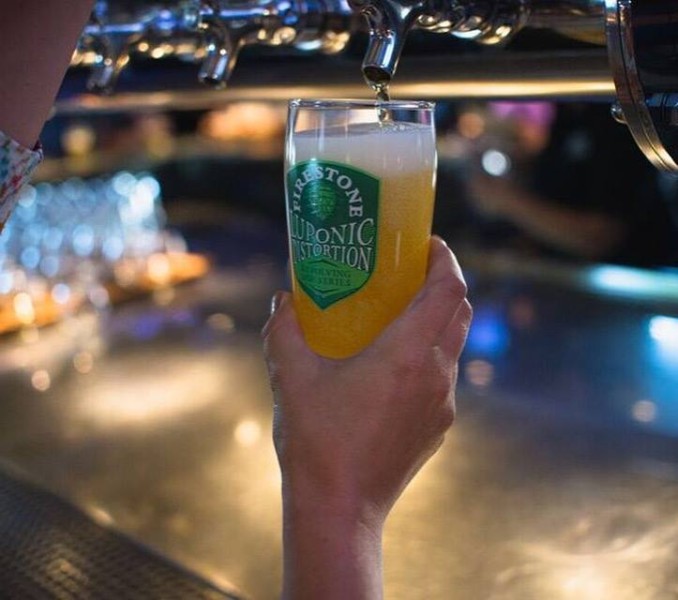 As with the inaugural Luponic Distortion Revolution 001 released in the spring, Revolution 002 is loaded with an eclectic multitude of hops—but the hops have been remixed to deliver new twists of aroma and flavor. Revolution 002 hits the ground this month while the last of Revolution 001 rides off into the sunset.

Luponic Distortion is not a single beer, but rather an ongoing series of beers that evolves and revolves approximately every 90 days. It is built around experimental hops, designed to showcase the possibilities of pure hop aromas and flavors without any assist from adjuncts. While the base beer always remains the same, each revolution features a different hop blend.

The lead hop this time is a new cultivar from an experimental plot in the Pacific Northwest. “It has these vivid peachy flavors with tropical notes reminiscent of papaya,” Brynildson said.

Hops from New Zealand and Germany are also in the mix. Of the seven hops in the blend, only two are carryovers from Revolution 001—and three are hops never used by Firestone Walker before.

“This beer truly touches every corner of the hop growing world,” Brynildson said. “The southern hemisphere hops add these bright Sauvignon Blanc-like accents of grapefruit and gooseberry, and there’s this new variety out of Europe that ties everything together with honeydew aromas and an underlying herbal pine quality.”

Yet for all of the hop remixing, there is a core common thread that extends from Revolution 001 through Revolution 002. “If you compare them side by side, it’s not like tasting a totally different beer, but rather an evolution of the same beer,” Brynildson said.