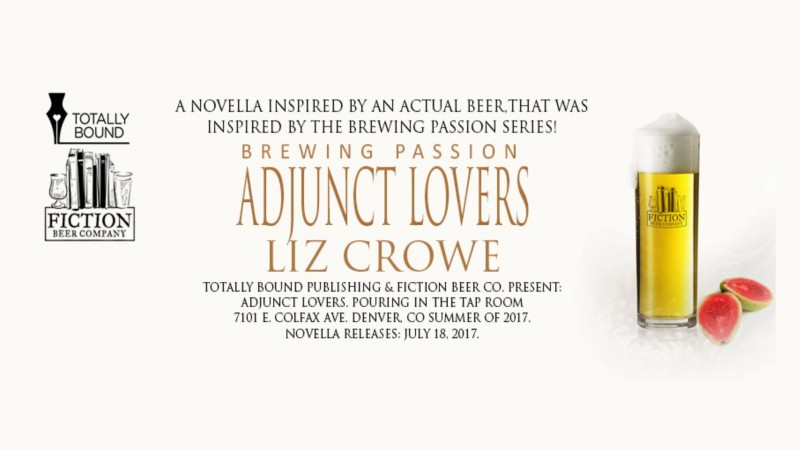 The collaborative backstory: Fiction beer was tagged on Facebook regarding an article on The Beer Necessities written by Aaron Goldfarb titled “Romance novels for Beer Geeks: Inside Craft Beer-Themed Literature,” which featured Liz Crowe. She has written 42 total books since 2010—with many of them based in the craft beer world. (Liz doesn’t just write about the beer world, she works in it—as founder and marketing director of an Ann Arbor-based brewery, and now as marketing, distributor relations, and social media consultant for various breweries. She is also one of the founders of a Michigan-based women’s beer collective called Fermenta.) With titles such as, “Paradise Hops, “Tapped” and “Lightstruck” our interest was piqued! We immediately reached out to Liz to see if she would be interested in helping us name our Guava Kölsch. A lot of email exchanges later and we had our collaborative plan: a fantastic name for our Guava Kölsch and a novella written by Liz with our beer being brewed in the story!

The beer: ‘Adjunct Lovers’ is a Kölsch fermented with guava. The Kölsch beer style is known for being light, crisp and refreshing—a perfect canvas for fruit. We always try to make our fruit beers so that the fruit is noticeable but does not detract from the beer. The beer was fermented with .5 pounds of guava per gallon. The result is a solid classic Kölsch enhanced by the powerful and delicate flavor of guava.

Color: A hazy pale straw, tinted with a touch of pink and orange.
Aroma: Burst of guava on the nose followed by a light bready pilsner malt character. Notes of other fruits including papaya, mango and ripe pear.
Flavor: Soft pilsner malt sweetness followed by a delicate touch of guava fruit flavor mingled with a mellow fruity sweetness. Fruit character continues to increase as the beer warms.
Mouthfeel: Medium-bodied but dry and refreshingly drinkable.