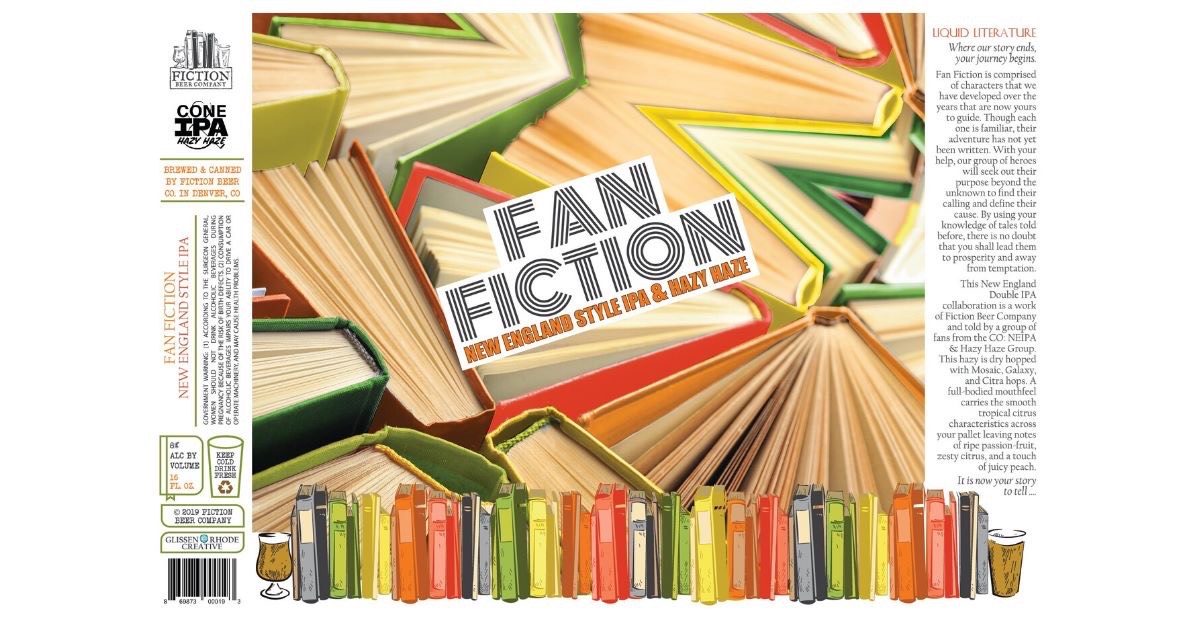 Fan Fiction is a New England Double IPA made with malted oats, malted wheat, and Root Shoot’s Gold medal winning Genie Pale malt with Mosaic, Galaxy, and Citra hops that will be available on tap and to-go in 16oz four-packs directly from the brewery taproom. The beer showcases a soft mouthfeel and citrus flavor, from the use of oats and tropical hops. Orange, mango, pineapple, and lemon balance a hoppy aroma full of grassy and tropical notes.

Fan Fiction was designed, named, and brewed with the help of an online beer group called CO:NEIPA & Hazy Haze. This beer group was founded on December 24, 2017 by a small group of Colorado beer lovers to focus on New England IPAs, currently the most popular style of beer in the United States.

Scott Davidson, co-founder and one of the admins for CO:NEIPA & Hazy Haze, said that the group was created because of criticism for New England IPAs. “Back when we started the group, there was a daily debate about the appearance of these beers. Many called the beers “lazy” and accused breweries of not filtering the beer or adding flour to create the brilliant golden murky look the style has become known for. We just got tired of people belittling the style, so we started our own group. The group has become a hub for for the style, breweries that make these kinds of beers, and a place where members can go for recommendations and feedback” Scott said.

Fiction Beer Company was one of the first breweries in Colorado to brew a New England IPA. The brewery has since become one of the most influential breweries in the state of Colorado for the style, winning a Bronze medal for Madame Psychosis for “Juicy or Hazy Pale Ale” at the Great American Beer Festival, the first brewery in the country to win the award in 2018 when the style category was introduced. Ryan Kilpatrick, co-owner and founder of Fiction Beer Company, was also one of the first members of CO:NEIPA & Hazy Haze and has been a supporter of the group since the beginning.

“When Scott mentioned the idea of collaborating with CO:NEIPA & Hazy Haze I was immediately excited,” says Ryan Kilpatrick, “we have collaborated on many beers with breweries in the past, so the chance to collaborate with a group of folks who are passionate about the style was a no brainer.”

In early October, the idea for a collaboration beer between Scott and Ryan began to take shape. Over the next two months, the two worked together with members of the online beer group to design a recipe, pick the hop profile, vote on the name, and then brew the beer. Fan Fiction’s name was suggested by Brian Fehrle, a member of the group. The brewery plans to release the beer with a special member party which will include exclusive member-only glassware designed by the brewery.

Fiction Beer Company is a multi-award winning craft brewery in Denver, CO.  Started in 2014 by beer and book lovers Ryan and Christa Kilpatrick Fiction Beer combines the things they both love turning their passions into a business.  Recognized as the first brewery in Colorado to brew a Hazy Style IPA.  They are also known for their lagers, imperial stouts and sour beers as well as always having a rotating selection of styles on tap.  Fiction Beer Company can be purchased at select liquor stores in the Denver Area and is also available on draft at select bars and restaurants.