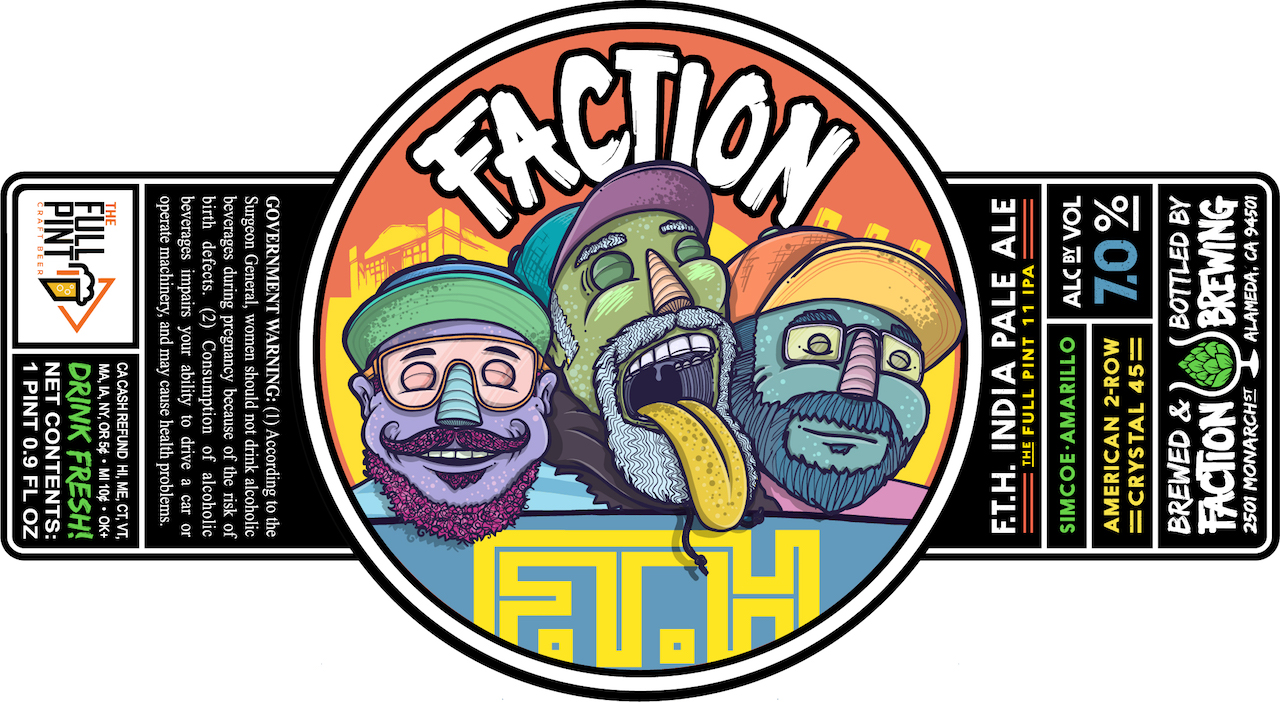 (Alameda, CA) – The Full Pint is celebrating their 11th Anniversary with an 11 stop collaboration tour. Our fourth stop is with our great friends at Faction Brewing on September 1st for the release of F.T.H. IPA.

The story behind the beer: “When Danny and Jonny went up to Faction earlier this summer to collaborate, we joked with Brewmaster Rodger Davis that our collab beer should be a hazy IPA. Before we could finish our sentence, dear Rodger let out a scream “F$%K THE HAZE!” At that moment, we began drafting up a West-Coast Style IPA with some juicy yet old school hops. After we picked Simcoe and Amarillo, Rodger asked us, but what should we call it?? There was only one name that was suited for this collaboration and that is F.T.H. IPA. The T and H stand for The Haze, you can guess what the F stands for.”

Join Danny, Jonny and Moises from The Full Pint as we release bottles of F.T.H. IPA. The queso kings from Grilled Cheese Guy, and there will be some 11th Anniversary Commemorative T-shirts for sale.

The Full Pint will be at Faction Brewing to hang out when the tasting room opens at noon on Saturday, come say hi!

Bottles and cases of F.T.H IPA will be on sale. This is a limited edition beer and might be the only time this is brewed and bottled.

F.T.H. IPA is a clear, west coast-style IPA with Simcoe and Amarillo hops, clocking in at 7% abv.

Faction Brewing opened to the public in December of 2013 in a repurposed 25,000 sq. ft. Marine Corps helicopter hangar on the old Alameda Naval Base with sweeping views of the SF skyline and Bay Bridge. With pints, tulips and tasters of 20+ beers, 32 oz. and 64 oz. growlers and bottles to go, Faction offers a wide variety of pales, IPAs, Belgians, porters and stouts- and, when the barrels tell us they are ready, barrel-aged beers. Faction Brewing has dabbled in just about every style but the locals especially love  A-Town Pale, only available in Alameda, and keep coming back to fill their growlers and tip a few pints with friends.

The 20-barrel brew house has expanded quite a bit since opening- producing 4,500 barrels in 2015 and 6,500 in 2016. Likewise, the tasting room has expanded from a 6-tap kegerator and a few seats to a 20-tap direct draw system, 30 ft. redwood bar and ample seating indoors and on the 4,000 sq. ft. deck. Children and dogs are always welcome and there is plenty of room for them to play. While inside, you can see the brew deck, equipment and brewers hard at work alongside beautiful murals painted by local artists. To learn more, please visit http://factionbrewing.com.