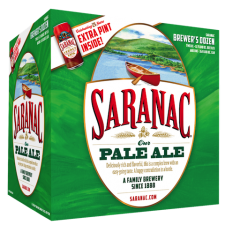 UTICA, N.Y. — F.X. Matt Brewing Company, brewers of Saranac, invite customers to celebrate the company’s 125th anniversary with a pint “on the house.”

In commemoration of this special anniversary, F.X. Matt Brewing Co. is introducing the first-ever Brewer’s Dozen for a limited time. This unique package includes 12 Saranac beers with a bonus pint of the limited edition Legacy IPA.

“We didn’t want this anniversary to be about us,” said company President Fred Matt. “Instead, we are celebrating by giving thanks to the loyal and adventurous Saranac customers who have been along for the ride.”

The new Legacy IPA is inspired by their founder’s original IPA recipe, which used the most innovative ingredients available at the time. Similarly, the Legacy IPA features a blend of historic, traditional and innovative hops for a heavenly aroma and full-bodied flavor.

“Great beer is our family’s legacy, and Legacy IPA is our way of bottling and sharing that passion,” Fred said.

Actively run by third and fourth generation Nick and Fred Matt, the family credits the innovative philosophy instilled by their grandfather and great-grandfather, F.X. Matt I, for the longevity of the company.

“We’ve had our ups, downs and times when we didn’t know if we could keep the doors open,” CEO Nick said. “But thanks to the support we’ve had from customers to try new things, we’ve been able to continue to grow and thrive.”

F.X. Matt Brewing Company in Utica, N.Y., was founded in 1888. Today, under the leadership of the third and fourth generations of the Matt family, the brewery is celebrating 125 years of brewing. Through a commitment to innovation and brewing excellence, the company has earned a reputation as one of the country’s most respected brewers of craft beers, including the premium Saranac line. In each bottle of Saranac, you’ll find exceptional quality, distinctive ingredients and a refreshing twist on tradition – the signature of the F.X. Matt Brewing Company.