(White Salmon, WA) – Everybody’s Brewing announced the release date of their new 12oz can, Mountain Mama Citra Pale Ale, available beginning Friday, March 16th. Coming in at 5.6% ABV, and 55 IBUs, the hop profile is led by Citra, but also uses Cascade and CTZ for bittering. The brewery plans to keep this beer available year-round, with a release party scheduled at Volcanic Bottle Shoppe in Hood River from 5-8pm that Friday night. 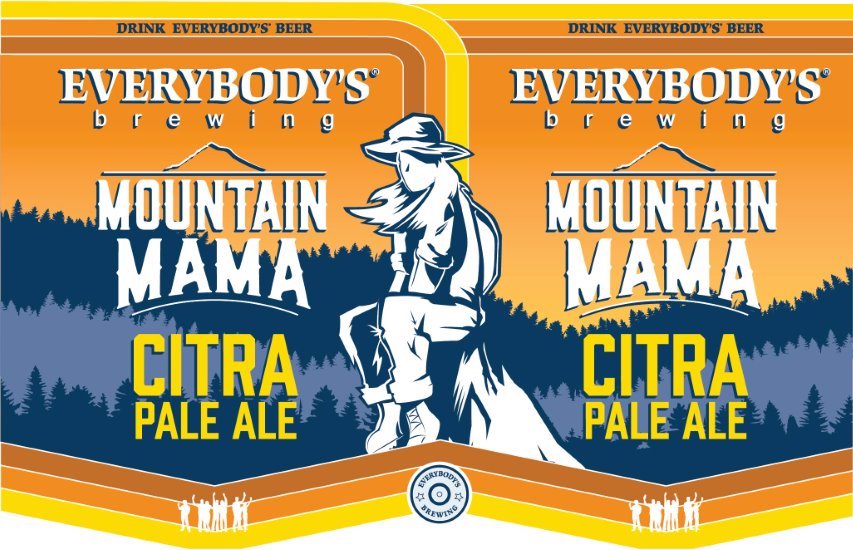 Mountain Mama’s Citra-forward recipe gives it a juicy aroma and flavor, with thirst-quenching citrus flavor. Rolled oats are used in the grain bill, which adds body and gives the brew a silky mouthfeel. They were given permission by Yakima Chief – Hopunion to use the word “Citra” in the name, as it is a proprietary hop grown by the farm.

Choosing which beer to package for year-round distribution is a big decision for a brew-ery, but they are confident in Mountain Mama. Owner/Brewmaster Doug Ellenberger said they carefully considered current market trends. “We see a lot of things coming full circle. IPAs are still king, but a lot of consumers want a juicy IPA flavor with a lower ABV, so they can enjoy more of them. It makes a Pale the perfect style for a can.” Six packs will first hit the shelves of local bottle shops and small grocery stores, and rollout into major chain stores is expected by the start of this summer.

Just five years ago, Ellenberger found his brewery on the leading edge of a different market trend: craft beer in a can. At that time, glass bottles were the preferred package type, and almost no one was using cans. Everybody’s Country Boy IPA helped pave the way for what is now commonplace: IPA in a can. When mentioned as a trendsetter, Ellenberger is humble, “Yeah, we were early adopters, but it just made sense. It’s better for the beer, the consumer, and the environment. I’ve loved canned beer since I was a kid, so I couldn’t wait to put our IPA in a can. Now everyone is doing it, and I couldn’t be happier about it.” The new Citra-Pale will join their current can lineup of Country Boy IPA, and Local Logger Lager.

Mountain Mama was originally brewed exclusively for Mount Hood Meadows Ski Re-sort. It’s overwhelming popularity and positive reviews made it the clear choice to put in a can. “The Citra Hops we got this year from Yakima Chief – Hop Union were so flavorful and bright; they really make this beer pop. Getting first hop selection is an honor, and you can taste the dif-ference. It’s got a huge aroma, and clean finish,” said Head Brewer, Adam McClure.

The beer is named Mountain Mama in honor of co-founder of the brewery, Christine El-lenberger, who graduated from West Virginia University, where she was a whitewater rafting guide and kayaker. A true outdoors-woman, her love of snowboarding and rivers brought her to the Northwest, which inspired Doug to give her the nickname Mountain Mama. “She’s the heart and soul behind this brewery. We wanted the artwork on the can to represent what a strong and amazing woman she is”, said Doug. “We hope to see lots of people celebrating with us at Vol-canic on Friday.”

About Everybody’s Brewing…
Everybody’s Brewing opened in 2008 in White Salmon, WA by Doug and Christine Ellenberger with over 20 years of professional brewing and restaurant experience. Their award-winning beers are widely distributed throughout Washington, Oregon, and Northern Idaho. The brew pub offers fantastic, locally sourced food, with an outdoor deck that provides a stunning view of Mt. Hood and the Columbia River Gorge. This combination makes Everybody’s Brewing a must-visit attraction when traveling to the Northwest.