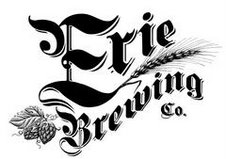 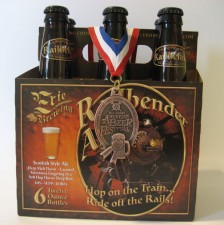 With only a total of 222 metals awarded out of over 2900 entries The staff at Erie Brewing Co are extremely honored that Railbender Ale is one of the chosen few to take home a medal. The Great American Beer Festival was represented by 127 judges from 11 countries this year, judging beers in 75 different categories.

Erie Brewing Co Brewmaster Shawn Strickland was flabbergasted when he received a call from Bruce Pia, Erie Brewing Co. General Manager, that Railbender Ale has one the Bronze. Shawn, who has been the Brewmaster at Erie Brewing Co since 2002 is honored that the judges considered Railbender Ale a world class example of a Scottish Style Ale and awarded it a medal. This is a big deal for our best selling beer to be regarded as one of the best Scottish Style ales in America.

Railbender Ale is Erie Brewing Company flagship beer that features a deep malt flavor caramel sweetness lingering in a soft hop flavor. It is dark amber in color and weighs in at 6.8% alcohol by volume.

Erie Brewing Co brews and bottles 10 beers, 4 year round offerings and 6 seasonal releases, and are currently distributed in 10 states (PA,OH,MI,IN,OR,NY.NJ,MD,VA,FL). All beers are currently available in 12 oz bottles, ½ and 1/6 barrels. Erie Brewing Co was founded in 1993 and is currently Erie Pa’s only Microbrewery.