Hundreds Turned Out to Toast Craft Beer and Save Local Beaches

Karl Strauss Brewing Company hosted its first beer and music benefit in Orange County raising $2500 for the Surfrider Foundation and $500 for aspiring brewers.

Karlfest took place on Saturday October 4, and featured over 20 beers on tap-highlighting many specialty and seasonal releases by Karl Strauss. The event kicked off with our Brew Master, Paul Segura, tapping a seasonal Oktoberfest cask. Samples of the cask were enjoyed with a vintage sheep’s milk Gouda to highlight the toasted and caramel flavors of the Oktoberfest. 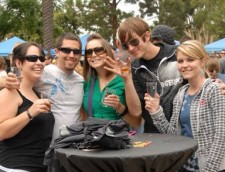 Guests were also able to sample the much anticipated Double IPA – coming in at 8.2% ABV and loaded with citrus and tangerine flavor from the large amounts of New Zealand Nelson hops used.

Karlfest was a chance to highlight Orange County’s local music and craft beer scene. Four guest breweries from Orange County – The Bruery, Tustin Brewing Company, Pizza Port San Clemente, and Backstreet Brewery were present at the event creating an authentic craft beer experience. Local talent The Union Line, Satisfaction, and Aushua performed at the event and were added to the music playlist in all 6 Karl Strauss Brewery Restaurants. Karl Strauss has become known for supporting emerging and independent artists at their events and has been working with a new music provider to provide those local bands with additional awareness through their restaurants.

An apartment in Mission Beach, two college grads, a 75-year-old master brewer, and a passion for beer… when Karl Strauss Brewing Company started brewing full-flavored, quality handcrafted beer in 1989, it was the first craft brewery to open in San Diego since Prohibition. Today, you can enjoy our flagship beers, special releases, and seasonals at any of our six brewery restaurants or other fine drinking establishments throughout Southern California. For more information visit www.KarlStrauss.com or call the brewery at (858) 273-2739.