(Salt Lake City, UT) – How far is too far? Well, if you are truly Epic, you’re more concerned with what’s not far enough. That’s why the adventurous and creative minds at Epic Brewing have taken barrel aging to a whole new level with this year’s Big Bad Baptist season. Not only are we releasing the most complex and outrageous version of Baptist yet, Quadruple Barrel Big Bad Baptist, but we have taken our barrel ageing program, stripped it down to its core and rebuilt it with one goal in mind – taking a legendary beer and making it even better. 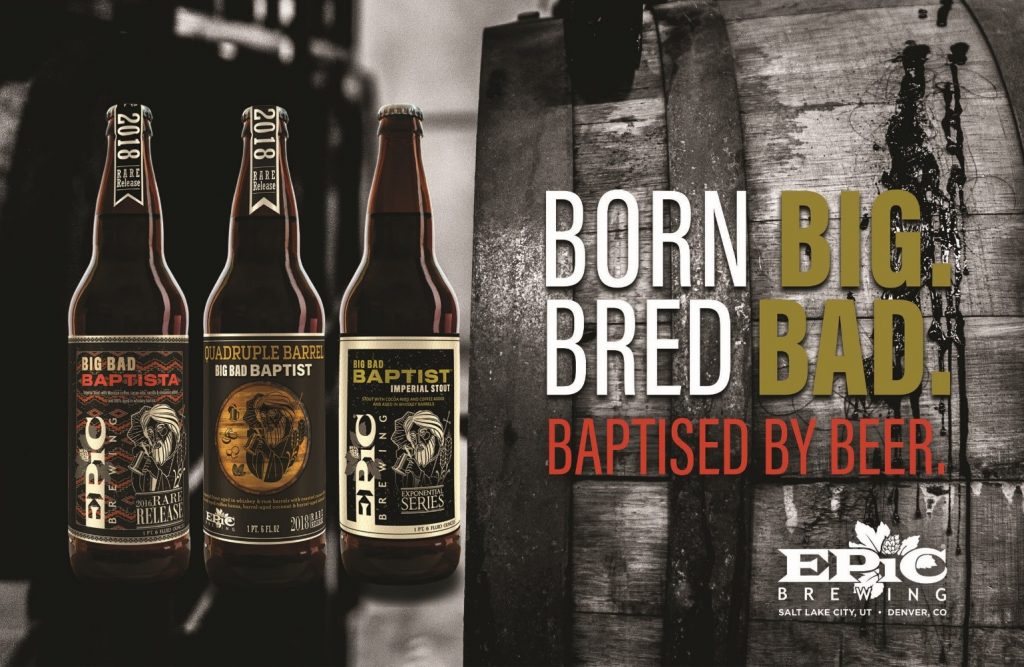 Quadruple Barrel Big Bad Baptist is one of those ideas that’s just crazy enough to be great. We started with our Imperial Stout and a grip of rum barrels. These tend to highlight the molasses and toasted marshmallow flavors in the beer and pairs perfectly with coconut as noted by the success of last year’s Triple Barrel Big Bad Baptist. But we felt like there was still room to take this concept and the complexity a step farther and it didn’t take us long to start experimenting with almonds. We packed first-use whiskey barrels with Blue Copper’s Brazil Cruzerio coffee beans, shaved coconut, and slivered almond so all three ingredients could soak up a much barrel character as possible before being added to the beer.

“We’re taking our 100% barrel aged philosophy to the extreme and barrel-aging any ingredient that will absorb the flavor and character of barrels before going in the beer. What’s great about this approach is that the adjuncts don’t mask any of the barrel character we’ve worked so hard to develop in the beer. Cracking the casks of coconut and almond open after they’ve aged is amazing. The entire brewery fills with the aroma and everyone starts to get excited to finally taste the results,” says Jordan Schupbach, Epic Brewing’s Director of Brewing Operations.

This year OG Big Bad Baptist is one of the finest and most fussed over releases we’ve ever produced. Each release is a hand-picked blend of first, second, and third use whiskey barrels. We’ve expanded our barrel aging program to over 2000 barrels and our cellarman track and taste each one as it develops. This attention to detail and the high standards we place on each barrel means the resulting blend is simply the best of the best. This year’s coffee is a Columbian origin roasted by Salt Lake City’s Blue Copper Coffee Roasters. The lightly roasted beans have a nutty and earthy quality that rounds out the chocolate, malt and barrel character. The coffee is still upfront but quick to step aside and show off the barrel character.

“We wanted this year’s Big Bad Baptist to reflect the complexity and nuance that goes into its making. In a lot of ways this year’s approach is a return to the first few batches we made when our program was only 20 barrels. I have to hand it to our team – handling a program one hundred times larger isn’t easy and you can taste the hard work and passion they put into the beer,” says Epic Brewing Co-Founder, Dave Cole.

Completing the trio this year is Big Bad Baptista. We just couldn’t imagine a winter without the warm and comforting combination of Mexican coffee, chocolate, cinnamon and vanilla. Adding to its long list of accolades Baptista was ranked #23 in Paste Magazine’s massive 144 Imperial Stout tasting and maintains a solid 4.4 caps on Untappd.

All three Baptists will be distributed nationally to all of Epic’s markets and will be available in stores by the middle of November.