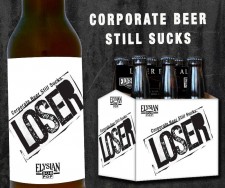 As if five years of celebrating the twentieth anniversary of Seattle indy label Subpop weren’t enough, Elysian Brewing’s erstwhile summer seasonal, Loser, is going year-round, just in time for anniversary number 25. The distinctive, tropical hop character and golden, warming maltiness will be available on draft, in 22oz bottles and in six-packs throughout the year starting March 8.

Loser began its life in 2007 as a collaboration between two Seattle alternative institutions. Elysian Brewing Company got together with Sub Pop Records to craft a beer that was available exclusively backstage at the anniversary celebration held at Marymoor Park. The next year the beer was back, on draft and in 22-ounce bottles at restaurants, taverns and stores that got the message, and just last year six-packs hit the shelves for the first time. Response has grown every year, and now it just won’t go away.

Loser was one of the first general-production beers to use Sorachi Ace hops, the Japanese variety rescued from obscurity and grown exclusively by Virgil Gamache Farms in Washington’s Yakima Valley. The waxy, coconutty and compelling flavor carries through the beer, combining with crisp and spicy Crystal finishing hops. And at 7% alcohol by volume, Loser isn’t your mainstream summer lightweight. For Elysian, Sub Pop and the beer-savvy public, having Loser available throughout the year is a clear win-win.