(ESCONDIDO, CA) — In recent years, barrel-aged beers have become some of the world’s most coveted creations. Crafting them typically involves sequestering heavy stouts or barley wines in whiskey barrels for long periods of time. It’s a straightforward and successful method utilized by many in the brewing industry. But sticking to “straightforward” isn’t what Stone Brewing Co. is about…especially when it comes to Collaboration beers. Starting today, fans can look forward to a truly unique West Coast imperial IPA blended with a Belgian-style tripel that was aged in reposado tequila barrels previously used to mature red wine. That limited offering, Ecliptic/Wicked Weed/Stone Points Unknown IPA, (made possible with the help of two renowned craft breweries) will start arriving in 22-ounce bottles and on draft to select retailers in markets where Stone beer is sold. 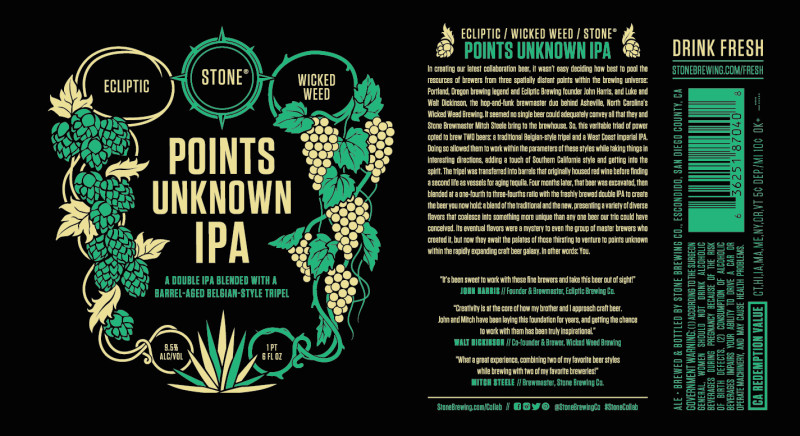 Craft beer enthusiasts have a quartet of noteworthy brewers to thank for this one-of-a-kind brainchild, starting with Stone Brewmaster Mitch Steele. When considering who to team with for the latest Stone Collaboration, he looked to two polar-opposite points spanning the American brewing landscape—Portland, Oregon and Asheville, North Carolina. Like Stone’s San Diego County home, these locales are considered hotbeds of craft beer ingenuity, thanks in part to the respective contributions of John Harris from Ecliptic Brewing, and brothers Luke and Walt Dickinson of Wicked Weed Brewing. The former held court as one of the Pacific Northwest’s best and longest-tenured brewers for a quarter century before opening Ecliptic, while the latter are the creative duo behind one of North Carolina’s most experimental, buzzworthy brewing outfits. These brewing powerhouses from points far removed joined forces to take this collaborative recipe to points unknown.

“I don’t think I could have asked for a more talented and fun group of collaborators to work with,” said Steele. “John is one of my oldest friends in the industry, and I really respect the ingenuity Luke and Walt have shown through the beers coming from Wicked Weed. When we were exploring recipe ideas, it was unknown for all of us exactly how well a double IPA would play with a Belgian tripel, but we decide to give it a shot. Now, having tried the final beer, we are really impressed with its uniqueness and complexity. It turned out to be a great representation of all our philosophies.”

The beer incorporates two disparate styles—a hop-forward, distinctly American IPA and a fruity Belgian tripel, both brewed with blue agave nectar—with influence from red wine- and tequila-saturated oak. It begs the question: What does this taste like? Tropical fruit aromas and flavors come courtesy of hop bursting, which is used to extract maximum character from a mixture of Amarillo, Calypso and Jarrylo hops late in the brewing process. The hoppiness is given brilliant depth care of banana and estery qualities produced by a Belgian yeast strain during the tripel’s fermentation. Subtle tannic, berry-like flavors and additional red wine notes are present from the triple-use barrels. Amazingly, the flavors blend seamlessly without competing in the glass.

To fully experience the massive hop presence, Ecliptic/Wicked Weed/Stone Points Unknown IPA should be enjoyed fresh; however, the beer may also be stored at proper cellaring temperatures (55°F or lower). How long can it be aged? It’s hard to say. And what will it taste like? Just as the case was when it was first brewed, we don’t know, so consider its aged manifestation yet another point of the beer’s intriguing unknowns.