(Pittsburgh,PA) – East End Brewing Company announces the release of 2015 Gratitude. Read on for all the details for their special release party, of note, the beer has been packaged in cans for the first time ever. Cheers. 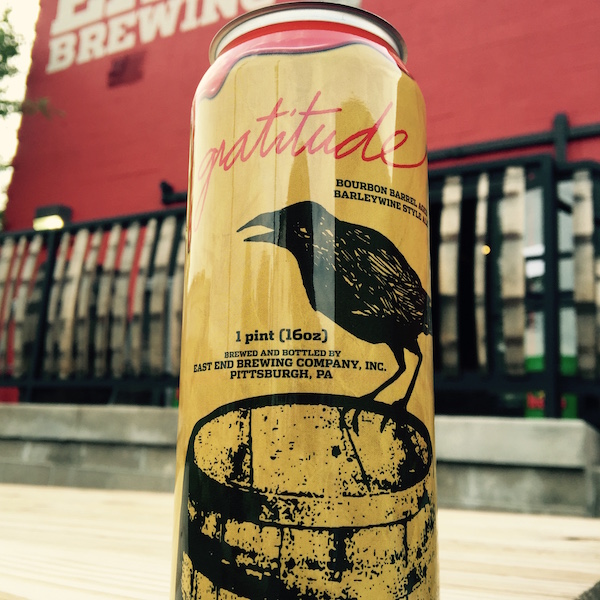 Our Gratitude is an 11% American Barleywine Style Ale aged in oak for 10 months. Gratitude is something we’ve been brewing every year since we opened back in 2004. It ages well, is hoppy when fresh, and has a deep complex malt character with 4 to 5 years of age on it. This is the second year we’ve released it in barrel aged form, but it’s the first year for cans.

We plan to continue to release future Barrel Aged Gratitudes in 16oz cans, but we still plan to keep the regular Gratitude Barleywine in big bottles for you.

Since we sold out of our Barrel Aged Gratitude on release day last year, we’ve decided to try something a little different this time around. As usual, our goal is to make sure everyone gets a fair crack at whatever they want.

To take the edge off of your anxiety around all that “Will I get some?” “Should I make the trip?” “I’ve got to get there early to hold my place in line!” stuff, we’re offering 2 advanced purchase options this year, so that on Release Day, you can come out at whatever time you like, have a couple of beers, grab a bite to eat, pick up your RESERVED beers, and make a relaxing day of it with us. Though you do need to pick it up some time on release day… otherwise, we’ll drink it.

ON RESERVATION DAY, MAY 20th AT THE BREWERY WE’LL HAVE:

ON RELEASE DAY, June 18th AT THE BREWERY WE’LL HAVE:

* Beers that are showing as “Draft” will be available in sample glass size and 13oz pours.