(Hood River, OR) – Double Mountain Brewery proudly to announces the return of their Belgian-style sour Kriek ales. The limited release of the 2013 vintage of Devil’s and Tahoma Kriek beers will be available on draft and in custom designed 375ml (12.7oz) split champagne bottles for purchase at Double Mountain Brewery & Taproom located in downtown Hood River on Saturday, July 26th upon opening at 11am. Starting July 28th, a supply of bottles will be sold in specialty bottle shops throughout the Northwest. 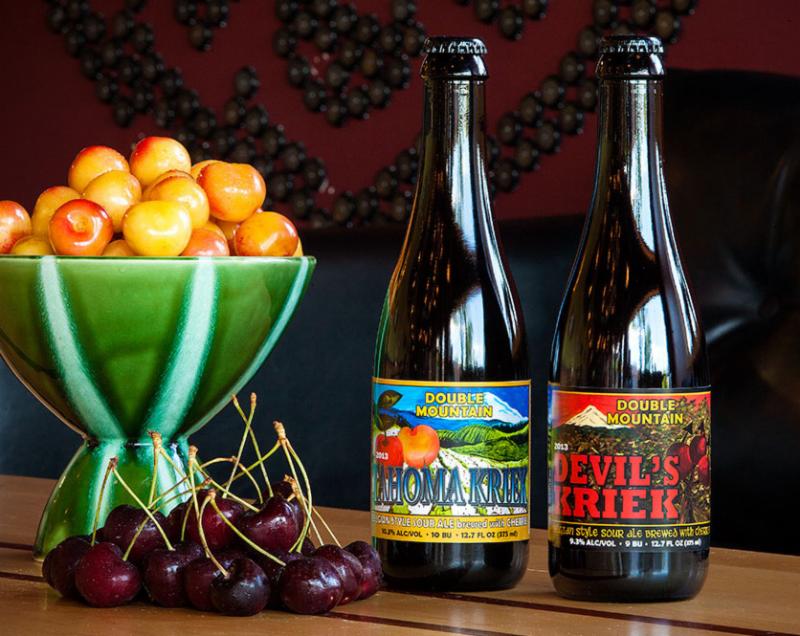 These Belgian-style sour ales combine the tart and funky flavors of Brettanomyces wild yeast with fresh fruit picked from the resplendent orchards here in the Hood River Valley. Devil’s Kriek combines dark-red Bing cherries with a Flanders Red Ale-style ale base, while Tahoma Kriek (the Native American name for Mt. Rainier) features the delicate Rainier cherry with a strong Belgian Blond ale. Over 5 lbs of cherries make their way into every keg. Double Mountain brews the Krieks once a year at harvest, and then let them spend a full year in their cellars to sweetly slumber.

The 2013 growing season for cherries was difficult for most orchardists in the Hood River Valley. Mid-summer rains are disaster for cherry growers, and a series of storms blew in right at harvest time last year. The rain causes the cherries to swell with moisture and split. Being brewers, we enjoy a good challenge. So again, we let the cherries ripen and split and develop more fruit intensity on the tree prior to adding them to the already fermenting the beer. The fruit was more raison like after it split, but was rich with sugary jammy goodness. The result drove the alcohol levels up quite a bit from prior years. The 2013 Tahoma is dry and puckery with cherry overtones with a touch of fennel smokiness from the Brett. The Devil’s has more body and richness and touch of residual sweetness, and earthy black currant with a bit of almond nuttiness from the contact of the beer with the fruit pits. It is to be expected that both of these beers will continue to change with some age, the Devil’s in particular is believed that it will continue to dry out and become more tart in the next few months.