Hood River, OR – After much anticipation, Double Mountain Brewery is introducing the limited release of the 2014 batches of both Killer Green and Killer Red Fresh Hop ales. They will be available on draft and in bottles for purchase at Double Mountain Brewery & Taproom located in downtown Hood River on September 26th upon opening at 11am. Bottles and draft will be available in local retail shops and local watering holes throughout the Pacific Northwest and parts of Southern California as early as September 26th. 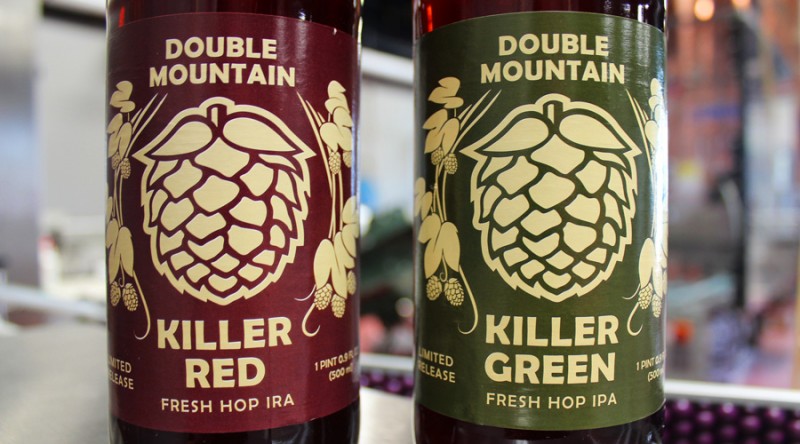 It was a good hops harvest this year, producing a bounty of Brewer’s Gold hops from Sodbusters Farms in the Willamette Valley to be used in this year’s Killer Green Fresh Hop IPA. Double Mountain brewers worked around the clock to ensure the fresh hops got into the boil, the hop back, and the fermenter as soon as possible. The result; melon, currant, savory citrus, kind herb, and pine aromas waft from the effervescence, supported by a dry, brioche malt body and a pleasantly lasting bitterness.

The 2014 Killer Red Fresh Hop IRA boasts two varieties of fresh hops; Perle and Sterling from Sodbusters Farms. The consortium of these hops provides the Killer Red with aromas of blood orange, pineapple, and forest. A healthy malt bill balances the top end and lends candied fruit, biscuit, and caramel character to the tongue.