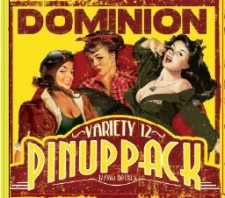 The Pinup Pack will contain Double D IPA, Morning Glory Espresso Stout and GiGi’s Farmhouse Ale.  Originally bottled in 22-ounce bombers last year, Double D and Morning Glory made the switch to 12-ounce bottles earlier in the year.  GiGi joins them in the 12-ounce format exclusively for the Pinup Pack. She will be replaced by Candi, a Belgian Tripel, in September.

President and CEO of Fordham & Dominion Brewing, Jim Lutz, stated, “Our goal with the Pinup Pack is to introduce more people to Double D, Glory and GiGi. The variety pack gives us a great platform to showcase each beer’s unique personality.”

All three pinups are available in 12-ounce bottles and on draft throughout the Mid-Atlantic region.  Double D and Morning Glory are also packaged in six-packs on a year-round basis.

The Fordham & Dominion Brewing Co. history is the story of two Delmarva craft breweries deciding to buck tradition and defy the ordinary.  In 2007, Fordham and Dominion combined forces in Dover, DE. The breweries jumped at the chance to challenge expectations, merging two craft breweries while maintaining their separate identities.

Fordham has been brewing since 1995 and Dominion has been brewing since 1989.  Together, they brew out of Dover, Delaware. They provide weekly tours of the brewery (located at 1284 McD Dr., Dover, DE) in conjunction with samples of their beers, such as Oak Barrel Stout, Double D, Rams Head IPA and Copperhead Ale.  For more information, visit FordhamBrewing.com or OldDominion.com or contact Lauren Bigelow at 302.678.4810 ext. 201.