(Milton, DE) – Calling all beer evangelists that enjoy imbibing with a purpose! Dogfish Head Craft Brewery created a new SUPER beer specifically designed for active lifestyle enthusiasts interested in incorporating high-quality ingredients in their beer choices – because that’s a thing they take seriously. Meet SuperEIGHT – a super-refreshing, sessionable Super Gose. At 5.3% ABV, this unique beer is made with eight heroic ingredients including prickly pear, mango, boysenberry, blackberry, raspberry, elderberry, kiwi juices and a touch of quinoa, along with an ample addition of Hawaiian sea salt. Brimming with hard-working ingredients, SuperEIGHT was brewed to harness the powerful goodness of all-natural fruits. It’s fresh, it’s delicious, and will be available nationally in 6pk/12oz cans in early April. Vibrant red in color, this Super Gose has a slightly tart taste and pleasantly refreshing finish, with delicious flavors of berries and watermelon. 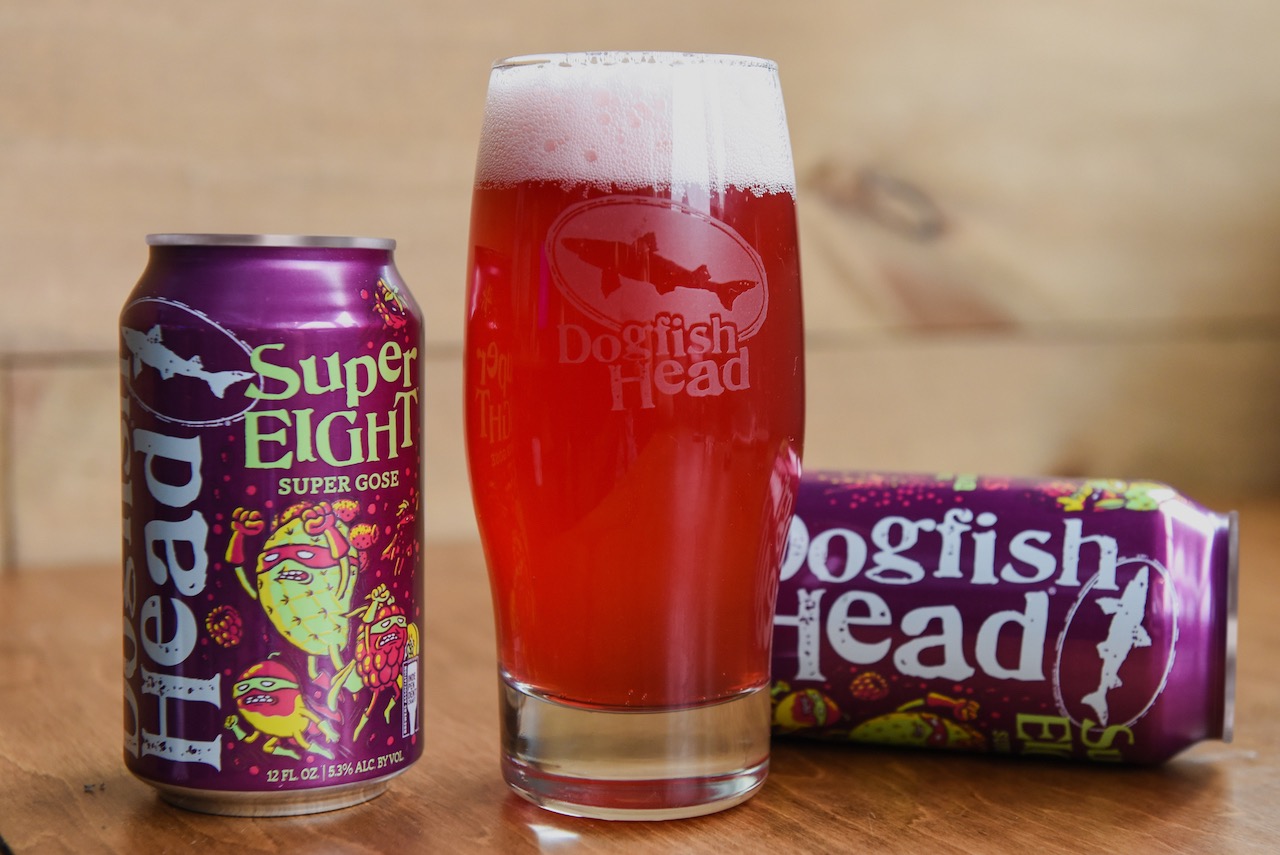 “We’re comin’ at ya with so much juicy flavor with the latest release of our new Gose, SuperEIGHT,” said Sam Calagione, founder and CEO of Dogfish Head Craft Brewery. “With the meteoric success of SeaQuench Ale growing to be the best selling sour beer in America,* we learned from consumers that approachable, refreshing, super-flavorful beers are what they’re seeking when making choices about beverages.  We’re listening, we heard you, and we think you’re going to love our wildly delicious SuperEIGHT.”

Oh SNAP! There’s more SUPER info to share…Dogfish Head ‘developed’ the inspiration for this beer with friends from Kodak. In 2018, Calagione joined Kodak, a world-class technology company, to record an episode of their podcast The Kodakery, discussing analog processes in the digital age. During the podcast, Calagione learned that the heightened levels of acidity and vitamin C in certain beers could make them an ideal processing agent for film. As luck would have it, the Dogfish R&D team was working to create a new beer that had a similar profile and unique ingredient bill to the liquid needed for developing film. BOOM! Just like that … SuperEIGHT was born and specifically designed to process KODAK Super 8 Film. Early batches of the beer were sent to Kodak to begin development. A series of tests were done, and they successfully proved that SuperEIGHT can act as a film developer. So what’s next? Calagione is planning an epic, Dogfish Port-to-Port boat trip up this East coast this summer.  He’ll be documenting part of his adventure on Super 8 Film which will be developed in SuperEIGHT beer and turned it into a short film. More details on the Port-to-Port trip will be announced on Earth Day, April 22.

For more information about Dogfish Head Craft Brewery and SuperEIGHT, visit dogfish.com. To learn about the collaboration and instructions for development, visit kodak.com/go/dogfish.

Dogfish Head has proudly been focused on brewing beers with culinary ingredients outside the Reinheitsgebot since the day it opened as the smallest American craft brewery 23 years ago. Dogfish Head has grown into a top-20 craft brewery and has won numerous awards throughout the years including Wine Enthusiast’s 2015 Brewery of the Year and the James Beard Foundation Award for 2017 Outstanding Wine, Spirits, or Beer Professional. It is a 350+ coworker company based in Delaware with Dogfish Head Brewings & Eats, an off-centered brewpub and distillery, Chesapeake & Maine, a geographically enamored seafood restaurant, Dogfish Inn, a beer-themed inn on the harbor and Dogfish Head Craft Brewery, a production brewery and distillery featuring The Tasting Room & Kitchen.  Dogfish Head supports the Independent Craft Brewing Seal, the definitive icon for American craft breweries to identify themselves to be independently-owned and carries the torch of transparency, brewing innovation and the freedom of choice originally forged by brewing community pioneers. Dogfish Head currently sells beer in 44 states and Washington D.C. For more information, visit www.dogfish.com, Facebook: @dogfishheadbeer, Twitter: @dogfishbeer, and Instagram: dogfishhead.