(ESCONDIDO, CA)  – The masterminds behind Dogfish Head Craft Brewery, Victory Brewing Company and Stone Brewing have joined forces once again to create the ever-flavorful, herb-infused Dogfish Head / Victory / Stone Saison du BUFF. In an honorable crusade for flavor, the Stone Collaboration beer will start arriving this week in limited amounts via 12-ounce six-packs and on draft to retailers in select U.S. markets. 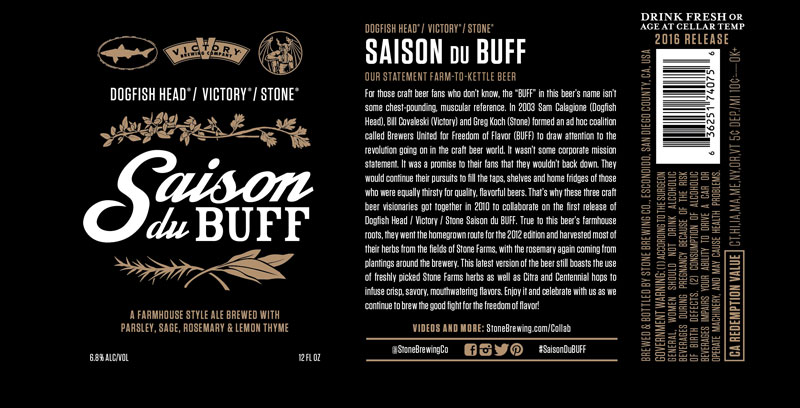 In 2003 Sam Calagione (Dogfish Head, founder), Bill Covaleski (Victory, co-founder) and Greg Koch (Stone, co-founder) formed an ad hoc coalition they dubbed Brewers United for Freedom of Flavor (BUFF) with the goal of drawing attention to the craft beer revolution. While it’s hard to fathom today, in 2003 the mainstream media gave scant notice to craft beer, and it was the three brothers of BUFF’s goal to change that by driving awareness for quality, flavorful beers.

The jointly developed recipe for Dogfish Head / Victory / Stone Saison du BUFF was first brewed at Stone in 2010 with all three BUFF brothers present, and then ever-so-slightly tweaked versions were replicated at each of the other two breweries that same year. Stone revisited it again in 2012, when fate (and the Craft Brewers Conference) brought all three good friends and industry compatriots back together again in San Diego. Rather than deprive the world of this special release, each year each brewery agreed to take turns brewing its own batch in rotating years, following the initial recipe for inspiration—Dogfish Head in 2014 and Victory in 2015. Thus, after a nearly four-year hiatus, Stone is rebrewing the dry-hopped saison for a glorious yet limited return to celebrate and further ignite the fight against dull, mass-produced beers.

“When we first came up with the idea for BUFF, we were on a mission to protest the flavorless, industrialized facsimiles of beer that dominate the marketplace,” explains Koch. “The thought was that if three brewers from different parts of the country banded together to form a coalition, it might help the rest of the world notice the incredible revolution going on within the craft beer world. Fast forward to now, and we’re brewing Saison du BUFF to continue honoring the serious strides craft brewers have made in our industry…and well, it’s a favorite of Sam, Bill and mine!”

This year’s release of the beer follows the original recipe from 2010, still boasting the use of locally harvested sage, lemon thyme, rosemary and parsley. Thanks to a Belgian yeast strain, very subtle clove and fruit-like esters are present in the flavor and are beautifully complemented with pronounced herbal characters. Citra and Centennial hops were added after fermentation to create prominent citrus and tropical fruit qualities in the aroma and beer’s finish. Overall, it’s very dry, with nice refreshing qualities that make it timely for the approaching warmer weather months.

Dogfish Head / Victory / Stone Saison du BUFF is ready to be enjoyed fresh or may be stored at proper cellaring temperatures (55°F or lower). Regardless of when the beer is enjoyed, fans are encouraged to celebrate all craft brewers who continue to brew in the good fight for the freedom of flavor!

About Stone Brewing
Founded by Greg Koch and Steve Wagner in 1996, San Diego-based Stone Brewing is the 9th largest craft brewer in the United States. Stone has been listed on the Inc. 500 | 5000 Fastest Growing Private Companies list 11 times, and has been called the “All-time Top Brewery on Planet Earth” byBeerAdvocate magazine twice. The multifaceted company will be the first American craft brewer to independently build, own and operate a brewery in Europe, and is also building a production brewery and destination restaurant in Richmond, Virginia. Brewing at both locations is anticipated to begin in spring 2016. Known for its bold, flavorful and largely hop-centric beers, Stone has earned a reputation for brewing outstanding, unique beers while maintaining an unwavering commitment to sustainability, business ethics, philanthropy and the art of brewing. For more information on Stone Brewing, please visitstonebrewing.com or the company’s social media sites: Facebook, Google+, Instagram, Pinterest,Twitter and The Stone Blog.