(Milton, DE) – Born at the crossroads of hops, grapes and goodness, Dogfish Head is excited to announce the late April debut of Mixed Media, its newest beer-wine hybrid creation. Brewed with a distinct Belgian yeast strain, Mixed Media is a complex vino-esque ale with a spicy white wine body, and notes of sweet melon and white grape. With 51% of the fermentables coming from grain and 49% coming from grapes, this wine inspired ale is quite literally the closest to a wine a beer can legally be. Clocking in at 7.5% ABV and 15 IBUs, Mixed Media is pale straw in color with a tart, dry finish. Late-harvest Viognier grape must from friends at Alexandria Nicole Cellars in Washington were used in the brewing process to round out the flavors. 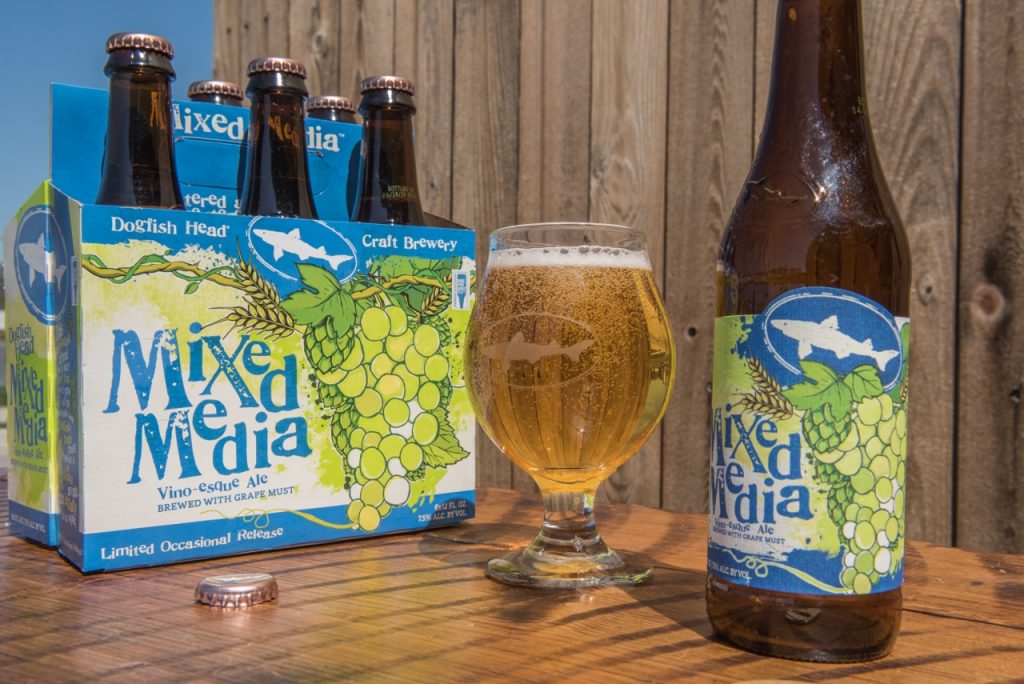 “We have been brewing and releasing beer-wine hybrids every single year since 1996 when we released our Raison D’Etre,” said Sam Calagione, founder and CEO of Dogfish Head Craft Brewery. “By blending the two seemingly opposite worlds of beer and wine together we’ve discovered that they collide quite nicely, and the combination of the two adds an additional thread of flavor and a layer of complexity to the mix. Our newest spin, Mixed Media, is perfect for wine drinkers who are at beer drinking occasions or folks that enjoy a crisp, light Pinot Gris.”

A beer that pleases the palate of both Chardonnay and mead drinkers alike, Midas Touch, the original Ancient Ale and first beer-wine hybrid from Dogfish, is a sweet, yet dry beer made with barley, honey, white muscat grapes and saffron. Another fan-favorite for those that love vino is Sixty One, an innovative beer marrying Dogfish Head’s award-winning 60 Minute IPA and Syrah grape must.

Back by popular demand and available starting in May is Festina Pêche, a tart and refreshing neo-Berliner Weisse. Brewed to deliver a green apple-like tart flavor balanced with sweet peachy goodness, this off-centered ale is unique in that the fruit complexity is woven into the aroma and taste through the natural fermentation of the peach sugars. Available for the first time in 12oz/6pk bottles, this pale straw-colored, highly sessionable beer clocks in at 4.5% ABV and 8 IBUs and is the perfect companion ale for the dog days of summer. “We started brewing Festina Pêche back in 2007 and a full decade later, it continues to be one of our top selling, most requested beers by our fans,” says Calagione.

About Dogfish Head: Dogfish Head has proudly been focused on brewing beers with culinary ingredients outside the Reinheitsgebot since the day it opened as the smallest American craft brewery 22 years ago. Dogfish Head has grown into a top-20 craft brewery and has won numerous awards throughout the years including Wine Enthusiast’s 2015 Brewery of the Year and the James Beard Foundation Award for 2017 Outstanding Wine, Spirits, or Beer Professional. It is a 300+ coworker company based in Delaware with Dogfish Head Brewings & Eats, an off-centered brewpub and distillery, Chesapeake & Maine, a geographically enamored seafood restaurant, Dogfish Inn, a beer-themed inn on the harbor and Dogfish Head Craft Brewery, a production brewery and distillery featuring a tasting room and food truck. Dogfish Head supports the Independent Craft Brewing Seal, the definitive icon for American craft breweries to identify themselves to be independently-owned and carries the torch of transparency, brewing innovation and the freedom of choice originally forged by brewing community pioneers. Dogfish Head currently sells beer in 41 states and Washington D.C. and will expand into additional states in 2018.