(Milton, DE) November 7, 2016 – Keeping consistent with a ‘can-do’, innovative approach for twenty-one years and counting, Dogfish Head is proud to add cans to their lineup of world-class, off-centered offerings. On November 7, 2016, the continually-hopped 60 Minute IPA will be released in 12 oz. cans throughout the Mid-Atlantic, then into Dogfish’s full 30-state plus Washington D.C. distribution footprint in early 2017. The fan-favorite Flesh & Blood IPA and session-sour SeaQuench Ale will also be added to the year-round brand can lineup, early in the New Year. 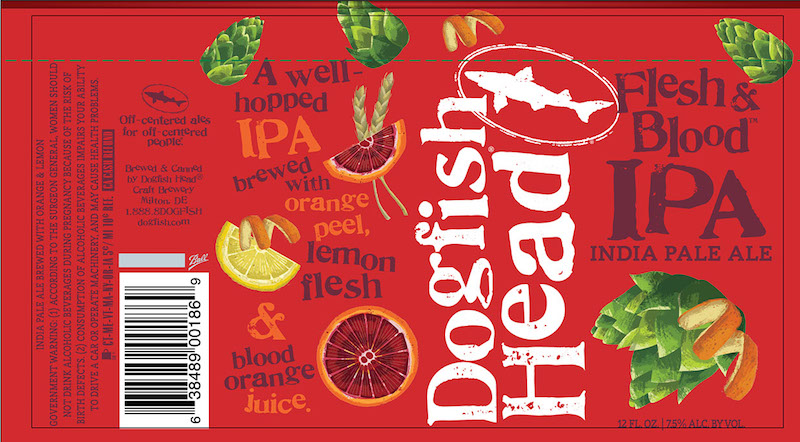 “Early on in the craft brewing renascence I was underwhelmed with the canning technology for craft beer,” said Dogfish Head founder and President Sam Calagione. “But times have changed, equipment has evolved, and we’ve designed a beautiful, state-of-the-art Krones can line that delivers the quality and consistency our consumers have come to expect from our beer.”

In 2013, Dogfish Head worked with Krones to commission its commercial bottling line and chose to partner with them again to bring the can line to life. Producing 267 cans per minute, the new production line allows Dogfish to can at the same consistency and quality assurance levels found in bottle and draft offerings. Dogfish Head sourced its advanced metal packaging from Ball, a state of the art can manufacturer, to guarantee there is no metallic off-flavoring in the beer due to a special liner found in all Dogfish cans.

The artwork for the cans, which was a collaboration between the Dogfish Head in-house creative team and design firm Interact, mirrors the beautiful new packaging design that was unveiled earlier this year. Just like the bottles, each can is stamped with a ‘can date’ to guarantee freshness and traceability. Executing the same all-encompassing testing performed on the bottling line, the Dogfish Quality Assurance team incorporated a seam test for all cans to pass which ensures no air is getting in and no beer is getting out.

“We’ve been able to grow from the smallest brewery to one of the top 20 craft breweries in the country, and we’ve done it in part by investing in world-class people and world-class equipment,” Calagione says. Look for 60 Minute IPA cans in the Mid-Atlantic market and in wider distribution in early 2017. For more information, visit dogfish.com

###
ABOUT DOGFISH HEAD
Dogfish Head has proudly been focused on brewing beers with culinary ingredients outside the Reinheitsgebot since the day it opened as the smallest American brewery 21 years ago. Today Dogfish Head has grown into a top-20 craft brewery and has won numerous awards throughout the years including Wine Enthusiast’s 2015 Brewery of the Year. Today Dogfish Head is a 250+ person company based in Delaware with a brewpub/distillery in Rehoboth Beach, an innovative seafood restaurant in Rehoboth Beach, a beer-themed inn on the harbor in Lewes and a production brewery/distillery in Milton.