(Philadelphia,PA) – It happened on March 30th; the year was 2014.  Dock Street Brewery released Walker, their groundbreaking, leg-dragging liquid tribute to AMC’s The Walking Dead.  The beer went viral, being featured stateside on E News!, After Midnight with Chris Hardwick, Time Magazine, Men’s Health, Esquire Magazine, and ABC, to name a few, and abroad in Canada, England, Ireland, Russia, Germany, Sweden, and China.  Craft beer aficionados and Walking Dead enthusiasts alike made their pilgrimage to the Brewery, but if post-apocalyptic zom-drams have taught us anything, ya gotta be quick.  The beer sold out in days.  Life’s not fair, and neither are zombies. 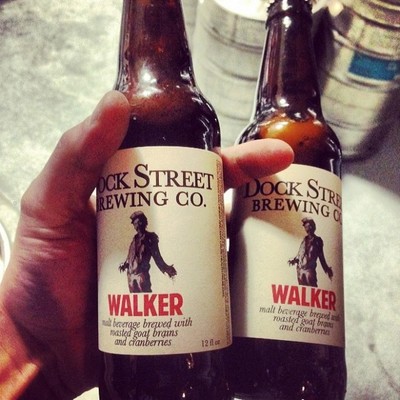 Things will be different.  In true doomsday preparation, Dock Street’s been stocking up on Walker. They brewed enough for in-house bottle and draft sales, a few kegs for select local craft bars, and for the first time in Dock Street’s History, set aside a limited amount of Walker for online sales*.   On the subject of ecommerce, a representative for Dock Street shared: “While we’re limited (and empowered) by our capacity, it’s really important for us to share this beer with fans all over the country; eSales of Walker are the best way to do that.”  Four-packs of 12 oz Bottles will be available online October 7 and at Ground Zero (Dock Street Brewery, 701 So. 50th St) on October 12.

On October 12, Dock Street will open at noon for brunch, beer, and Walker bottle sales, the day will culminate with a screening of the Season 5 premiere on the brewery’s 120” projector.   Join the Dock Street Bohemians for what promises to be an unforgettable experience.

For those out-of-state fans, Dock Street will begin shipping four-packs on October 7th with the hope, not guarantee, that customers will receive their brain beer goods in time for the Season 5 Premiere.  At 9pm on Sunday, join in the toast to the creativity of American Craft Beer, excellence in Zombie Drama, and of course, Dock Street Walker.   Pre-order your 4pack here https://dockstreetbeer.myshopify.com/  today.

Founded in 1985, significantly before the American Craft Beer explosion, Dock Street Brewery has been crafting high quality, artisanal beer in Philadelphia well before it was the thing to do. Just shy of 30 years, Dock Street has been earning both National and International accolade for their brews, capturing numerous medals at the Great American Beer Fest, Monde Selection and World Beer Cup.  Dock Street now calls West Philadelphia its home, brewing out of a beautiful, historical firehouse at the intersection of 50th and Baltimore Ave.  Rivaling their brews for flavor, balance, and quality are their hand-tossed, wood fired pizzas.