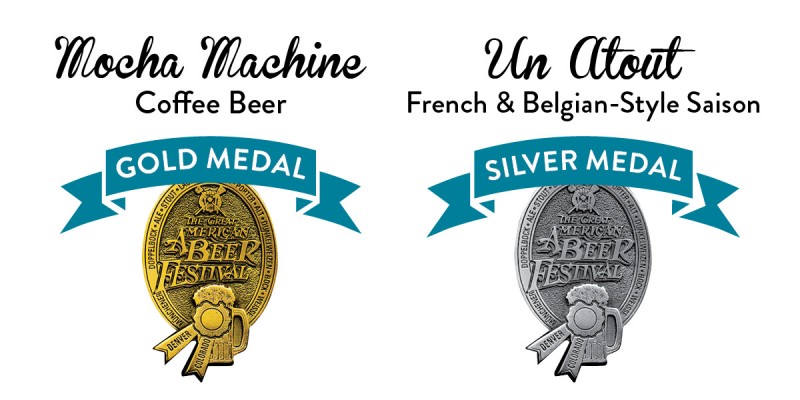 Taking home a Gold Medal for Mocha Machine in the Coffee Beer Category, a Silver Medal for Un Atout in the French and Belgian Style Saison Category and the win for Large Brewpub and Large Brewpub Brewer of the Year—Beachwood BBQ & Brewing’s Co-Owner Gabe Gordon, Brewmaster and Co-Owner Julian Shrago along with Assistant Brewer Ian McCall share this win with their entire staff and the growing Southern California craft beer scene.

“We are both humbled and honored to receive such prestigious awards at this year’s Great America Beer Festival. It means so much to be recognized again for both our beers and the brewpub,” says Beachwood Co-Owner and Brewmaster Julian Shrago. “We would like to extend a huge thanks to our loyal customers and industry peers for their continued support and encouragement.”

With an ever-growing culture of craft beer supporters, this year’s GABF featured 1,309 breweries and 5,507 beers judged by a panelist of 222 beer experts from 10 different countries.

“The awesome part about these awards is the sense of community they generate from all the people who have supported us along the way. Our friends and customers are just as happy about the win as we are,” says Co-Owner Gabriel Gordon. “Beachwood’s wins at GABF instils a sense of pride in all of us. Whether you enjoy Beachwood at our brewpub or your local watering hole we thank you!!”

Last year Beachwood took home 5 medals including a silver medal in the Sweet Stout category for Udder Love, which is now available on draft at Beachwood BBQ & Brewing.

To see the full list of medal winners from GABF 2014 visit brewersassociation.org.

Beachwood BBQ & Brewing, located in the heart of downtown Long Beach, CA serves slow-smoked, dry-rubbed, Southern Style barbeque and fresh, hand-crafted beer. As downtown Long Beach’s only independent craft brewer, Beachwood takes pride in brewing some of the best beers in Southern California. Beachwood also offers 24 rotating guest taps of some of the finest beers in the world, earning it recognition as one of the premiere craft beer bars on the West Coast. The original location in Seal Beach, CA continues to offer the same great menu and guest beer program. You can check out a real-time tap list at both locations by visiting the HopCam at www.beachwoodbbq.com.