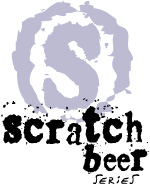 (Hershey,PA) – We just released three new Scratch Beers in the Tasting Room on Thursday, March 27. Scratch #135 – Rye Ale is a full-flavored Amber Rye Ale hopped with a healthy dose of Chinook, Crystal, and El Dorado hops and 15% Rye added to the malt bill to impart a subtle dry, spicy finish.

We also still have Scratch #136 – Red Ale on tap in the Tasting Room, with a limited supply of bottles coming soon to the General Store. Hurry in to try them all before they disappear! On the Scratch Beer horizon, look for a new Session IPA as well as the return of Rugged Trail, both coming to draft lines in the Tasting Room later in April.