(Portland, Oregon. Earth) – Ecliptic Brewing has teamed with Modern Times Beer for their next Cosmic Collaboration. 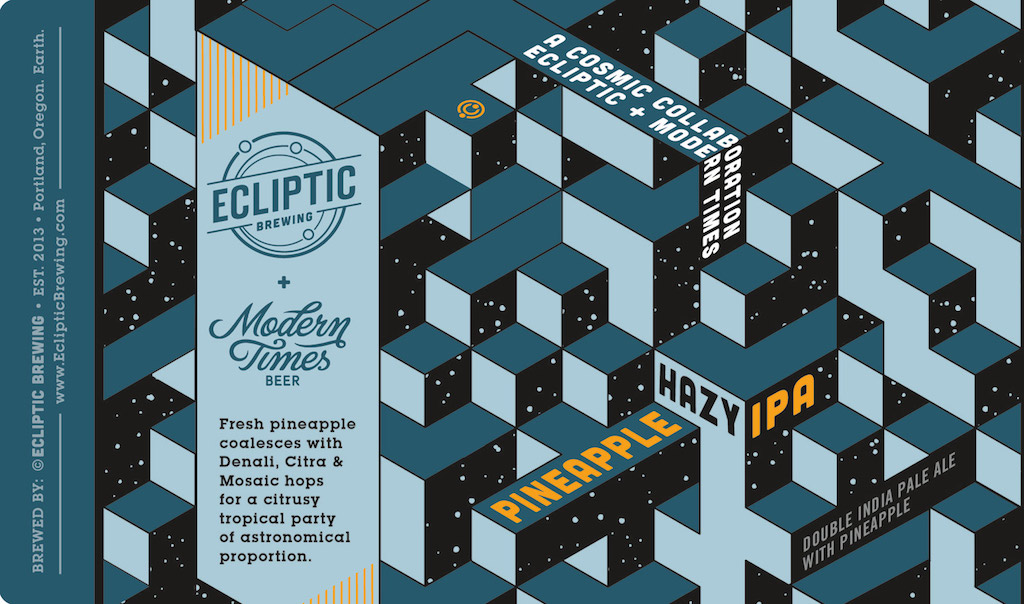 John Harris, Ecliptic Brewing Owner and Brewmaster, hoped this collaboration would be a way of welcoming Modern Times to their Portland outpost. “I have enjoyed Modern Times Beer for a few years,” he says, “and when we learned that they were moving to town, I reached out to Jacob in San Diego to see if they were interested in teaming up.”

Hazy IPAs haven’t lost any momentum this year and in deciding what kind of beer to make the two breweries looked at ways to experiment with the popular style. John says, “I had mentioned pineapple with Mat Sandoval, Production Manager of the Belmont Fermentorium, when we were talking about what to make. Mat said we should definitely use Denali hops for their tropical qualities and almost pineapple like character.” The result is a Pineapple Hazy IPA brewed with Denali, Citra & Mosaic hops.

In addition to draft, this will be Ecliptic Brewing’s first release in 500ml bottles. According to Alaric Lawrence, Ecliptic’s Packaging Manager, “It’s an exciting time for us to step in a new direction with our packaged beer. Trends have shown that beer drinkers prefer bottles that are a true pint and easier to finish in one pour.”

Ecliptic + Modern Times Pineapple Hazy IPA will be celebrated with release events in Portland. Details below.

Come hang out with the Ecliptic Brewing and Modern Times teams in Hillsboro! Compete in a paper rocket ship flying contest to win prizes.

Join the crew for the Portland release of this beer. Bottles will be available, along with tasty draft treats from both breweries.

For up to date details about the release events, visit Ecliptic Brewing’s Facebook event page, here.

Ecliptic Brewing is a venture from John Harris, an Oregon beer icon whose background is steeped in the state’s rich craft brewing history. The name Ecliptic unites Harris’ two passions: brewing and astronomy. As such, the brewery celebrates the Earth’s yearly journey around the sun through both its beer and restaurant menus. Executive Chef Michael Molitor rotates his seasonally inspired menu every six weeks in accordance with the old-world calendar. Harris’ signature beers include Starburst IPA, Orbiter IPA, Carina Peach Sour Ale and Capella Porter. For more information, visit: www.eclipticbrewing.com.