Join us as we celebrate the return of summer with outdoor fun reminiscent of your favorite elementary school tradition – Field Day! Field Day Beer Fest features refreshing beer samples from over 24 Midwest craft breweries, live tunes from DJ Nolan, outdoor games and activities such as bags, ladderball, horseshoes, and Jenga, and a Field Day inspired menu from DESTIHL’s culinary team. Break out your tennies, your favorite practice pinnies or lucky sweatband, and bring your team out for the fun! Prizes will be awarded for the most creative Field Day inspired outfits!

Our attending breweries aren’t sitting on the bench for this one. They need your help to cheer them on as they participate in the prestigious Cellarman’s Games! This battle for supremacy will feature an obstacle course that will require brains, brawn, luck, and liquid. Each brewery will compete against one other brewery. The top times overall go to the finals where we have a very special event waiting to determine the winner!

Cost:
$40 per person in advance (via Eventbrite)
$55 at the door
General admission gets you a souvenir tasting glass & 20 beer tastes
Attendees must be 21+ to enter festival area

Can I bring my children to the beer fest since it’s a Field Day? Unfortunately no. Field Day Beer Fest guests must 21+ years of age for entry in the festival area. However, DESTIHL’s Beer Hall will be open regular hours and does not have an age requirement for visitors.

Where is Normal, IL? The metro area of Bloomington/Normal is in Central Illinois…Just over 2 hours from Chicago and 2.5 hours from St. Louis along I-55 and Historic Route 66.

Can I dress up? Yes! We invite you to show up in your best Field Day inspired gear, and prizes will be awarded for the most creative outfits.

The official event page can be found here. 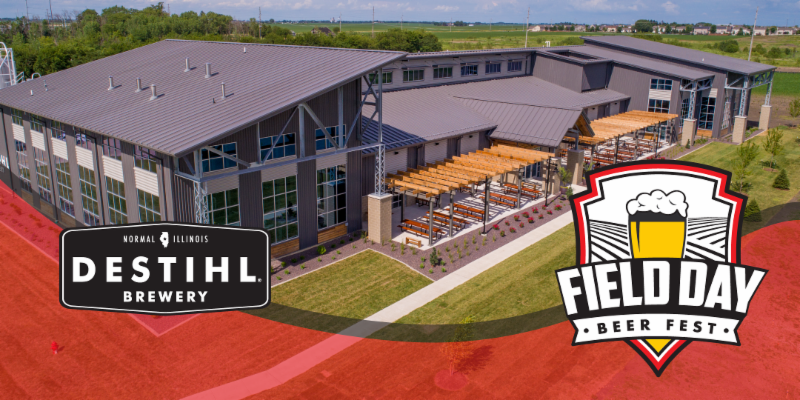