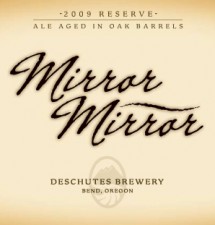 Mirror Mirror, the flavorful brew that officially kicked off Deschutes Brewery’s landmark Reserve Series, will be returning to store shelves this April following extraordinary consumer requests and feedback. First released in bottles in 2006, Mirror Mirror is an oak-aged barley wine that has been in production at the brewery for more than 10 months. Mirror Mirror is an inspired version of the brewery’s flagship, Mirror Pond Pale Ale, which has been doubled up to barley wine strength, yielding a rich malt base with hints of raisin and oak tinged with the slightest citrus hop aroma.

After its initial release, the brewery kept a small stash of Mirror Mirror in storage, sending a few kegs to a variety of events and festivals and pouring it at its pubs from time to time, where consumers discovered this unique beer, and a loyal following was born.

Eventually, the brewery’s stockpiles of Mirror Mirror were depleted, but consumer demand and requests for this groundbreaking beer – not to mention the brewers’ desire to brew it again – ensured another brewing. Although this will still be a limited release, the brewery hopes that every Deschutes fan, old and new, will get a chance to discover this amazing brew.

In true Deschutes fashion, Mirror Mirror has a unique hop character compared to other traditional barley wines. Innovative hop techniques were used to infuse the beer with layers of exotic flavors and aromas. The result isn’t hop overload, but instead a layered complexity that will undoubtedly pique the interest of even the most advanced palates.

“This year’s brewing will have a more layered and refined oak presence,” says Brewmaster Larry Sidor. “I’m really looking forward to this version of Mirror Mirror because it is not only an advancement for this beer, but it also shows the evolution of our knowledge related to barrel aging and how the whole Reserve Series has developed.”

All Reserve Series beers, including Mirror Mirror, are available in wax-dipped 22-ounce bottles with a suggested retail price of $11.99. Mirror Mirror will be available on draft at the Portland and Bend Brewery and Public Houses, as well as a few select establishments while supplies last.

Food Pairing:
The brewery team recommends pairing Mirror Mirror with skirt steak in a caramelized shallots red wine just to balance the strength of the brew.