Bend, Oregon/Chicago, Illinois – Deschutes Brewery and Goose Island Beer Company, both founded in 1988, have come together to create an Belgian-style ale to celebrate their shared silver anniversary. This beer is the third and final in Deschutes Brewery’s Class of ‘88 collaboration series, which celebrates the anniversary of craft breweries around the country that were founded in 1988. This beer aged in decade-old Muscat oak barrels for nine months – completing in perfect time for a 2013 holiday release. 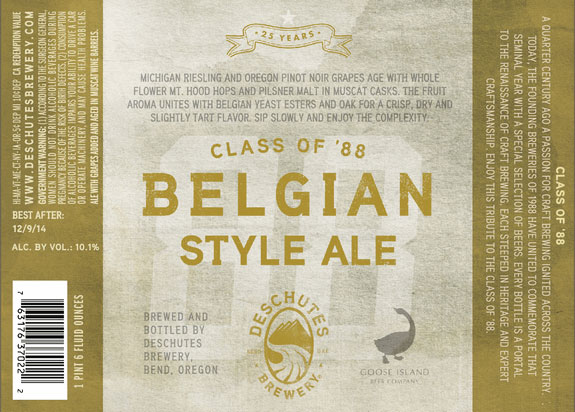 “It isn’t a coincidence that all but one of the “Class of ‘88” started brewing as brewpubs, including both Deschutes and Goose Island,” said John Hall, founder of Goose Island Beer Company. “In 1988 we were brewing styles of beer that were new to beer drinkers and as a brewpub we were personally interacting with customers and expanding their beer palates.”

Hall and Deschutes Brewery brewmaster, Cam O’Connor, worked together to create this exotic beer, which was brewed with Michigan Riesling and Oregon Pinot Noir grapes, hops from Mt. Hood and pilsner malt. Since last spring, 100 percent of the beer has been barrel-aging to result in a dry, slightly tart flavor with an oak boldness. Like all the Class of ’88 beers, each brewery will produce its own version of the brew in bottles and draft.

Launch events are planned in late-December at Deschutes Brewery’s Portland, Oregon pub and Goose Island’s Clybourn pub. Stay tuned to the Deschutes Brewery events page and Goose Island Beer Co.’s website for more information. Both beer versions will be available in each respective brewery’s distribution area for a very limited time in large format bottles and on draft. The alcohol by volume will be around 10%.

The first beer in the Class of ‘88 series was a barley wine made in collaboration with Rogue Ales and North Coast Brewing Company. The second, released in early summer, was an Imperial Smoked Porter made with Great Lakes Brewing Company.

About Deschutes Brewery
Celebrating its 25th anniversary this year, Deschutes Brewery began as a brew pub in downtown Bend, Oregon and is known for such brands as Black Butte Porter, its flagship brew and the nation’s number one selling craft porter, and the popular Mirror Pond Pale Ale. In addition to its original Bend pub, this family and employee-owned brewery opened a second pub in Portland’s Pearl District in 2008. The company’s main brewing facility is located on the banks of the Deschutes River and produces over 250,000 barrels of beer annually for distribution in 23 states and two provinces. To find out more, visit DeschutesBrewery.com.

About Goose Island
Founded in Chicago in 1988, Goose Island is one of the most successful craft breweries in the Midwest and produces some of the most popular, and award winning, beers in the U.S. Since 1989, Goose Island beers have won a variety of awards at acclaimed beer events including the World Beer Championships, World Beer Cup, European Beer Star, World Expo of Beer and the Great American Beer Festival (GABF). Visit www.gooseisland.com.