(ATHENS,GA) – Creature Comforts Brewing Company’s seasonal release, Cosmik Debris, will return this March. The beer will be available on draft and in six-packs of 12-ounce cans in the brewery’s tasting room as well as in the Athens and Atlanta markets. 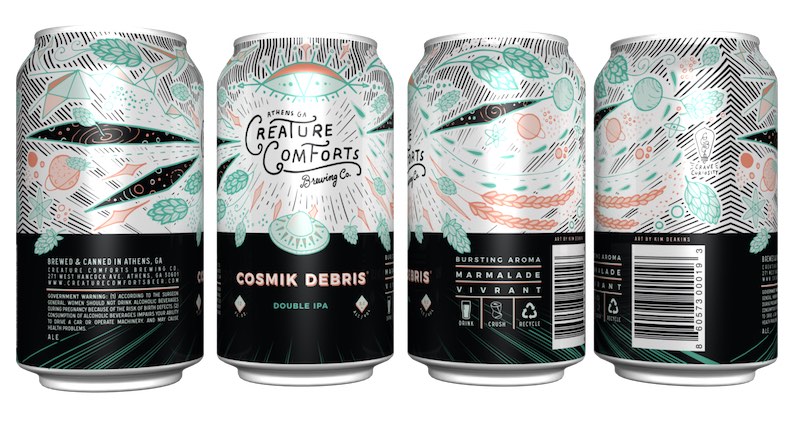 Cosmik Debris is a double IPA featuring Simcoe, Idaho 7, Mosaic, Cascade and Chinook hops, that together develop a bursting aroma of citrus zest, melon and subtle pine. The beer is 8-percent ABV and delivers a beautiful balance between firm bitterness and malt, with notes of starfruit and orange marmalade on the palate.

Cosmik Debris is released in March because the most recent crop of hops becomes available to the brewers at that time. In total, the double IPA uses five pounds of hops per barrel and is intended to be enjoyed when fresh.

“Cosmik Debris has a brilliant aroma from the hop profile that will lessen with age,” said Head Brewer David Stein. “This beer should be kept cold and consumed as fresh as possible.”

Creature Comforts collaborates with local artists on the can designs for its seasonal and limited releases. The label artwork for Cosmik Debris depicts a galactic scene that was designed by Athens artist Kim Deakins.

The seasonal release will be available onsite at the brewery March 23 as well as in the Athens and Atlanta markets shortly after the onsite release. For more information about Creature Comforts Brewing Company visit
www.creaturecomfortsbeer.com