(CORONADO, CA) – A new year means new beer and Coronado Brewing plans to ring it in in epic fashion. For the first time in four years the company is adding a brand new year-round offering to its core line up. Stingray IPA is set for national release in early January and will be in international markets by the end of the month. 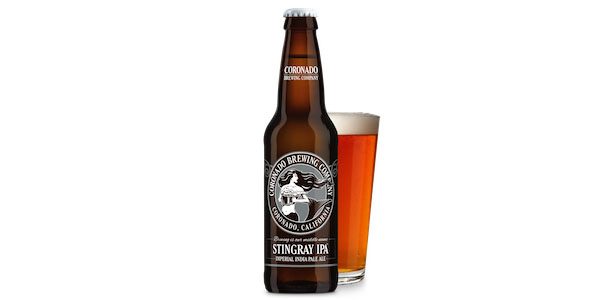 This Imperial IPA blends four of the sexiest hops on the market: Citra, Mosaic, Simcoe and Southern Cross. These hops come together to yield flavors and aromas of tropical fruits, sun-kissed citrus, and soft accents of nectarine and peach. “Stingray is off to a nice start and so far it’s been very well received,” said Brandon Richards vice president of sales and marketing at Coronado Brewing. “It’s got a great hop profile that’s easy-to-drink yet full of flavor,” continued Richards. “The brewers really came up with an amazing IPA that is garnering phenomenal feedback. And the beer really does sell itself; people take one sip and they are hooked.”

The company plans to celebrate the launch nationwide on January 15th with Stingray IPA Day. Bars across the country will be featuring Stingray and customers will get the chance to meet with Coronado representatives to learn about the new beer. Fans will also be able to connect with Coronado Brewing on social media and win special prizes by using the hashtag #StingrayIPA. Events will be held in the following cities: Boston, Chicago, San Francisco, Santa Cruz, Los Angeles, Orange County, and San Diego. For a complete list of participating bars, tasting rooms, and social media giveaway information visithttp://www.coronadobrewing.com/stingrayipaday.

About Coronado Brewing Company: In 1996, when craft beer was still a foreign term and San Diego County was home to only a handful of breweries, the Chapman brothers Ron and Rick opened a brewpub in their hometown of Coronado. Today CBC stays true to their San Diego roots, brewing abundantly hoppy West Coast-style ales, which are available today in nineteen US states and ten countries. In addition to the long-established pub in Coronado, the company opened a tasting room inside their newly built San Diego production facility in early 2013, and a tasting room and restaurant in Imperial Beach, California in 2014. Coronado Brewing Company was honored in 2014 with one of the brewing industry’s most prestigious awards-World Beer Cup Champion Brewery and Brewmaster for a Mid-size Brewing Company.
Links:
Website: http://coronadobrewing.com
Facebook: https://www.facebook.com/coronadobrewingcompany
Instagram: @CoronadoBrewing
Twitter: @CoronadoBrewing