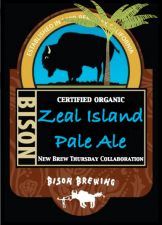 We’ve been fortunate enough to have met a young man by the name of Andrew Bell. Andrew is a mild mannered young man in his early 20’s, who is absolutely obsessed with fermented beverages, mainly beer.  Not long after speaking with Andrew, you realize he has so much passion for beer, whether it be ticking it or brewing it. We’ve told Andrew that the most logical next step for him is to do it professionally.  As luck would have it, Andrew entered New Brew Thursday’s Homebrew competition, with the winning prize giving him a chance to brew his award winning recipe on Bison Brewing’s professional scale system,using Certified Organic ingredients.  To learn more about this winning beer brewed by Andrew at Bison, read the official press release below. Cheers, The Full Pint

Berkeley, CA – It isn’t every day that a homebrewer gets the chance to upscale a recipe and brew on a commercial system under the guidance of a master brewer. But for one lucky California homebrewer, this dream became a reality.

Bison Brewing, the 100% certified organic brewery based in Berkeley, CA, teamed up with New Brew Thursday, one of the internet’s most compelling and popular craft beer video podcasts, to co-present a homebrew competition. Roughly 60 homebrews were judged over the course of four months. The winner, Andrew Bell, was awarded the opportunity to brew his Zeal Island Pale Ale recipe with Bison’s Brewmaster, Dan Del Grande.

Brewed with a blend of the palest malts, an excessive amount of New Zealand organic hops, the alcohol level of a Pale Ale and the hop content of a Double IPA, this unique creation is being classified a “New Zealand Pale Ale” (named for the region where its hops originated).

“As an organic brewer, hops are the most expensive and least accessible ingredient for us to work with. Only 25% of the hop varietals used in brewing are available certified organic. This is why hop centric beers are the most challenging for us to brew. However, the organic hops coming from New Zealand are quite extraordinary, with many varietals being higher in alpha acids (the bittering component of hops) than many of the trendy American hops. We are really excited to release a beer that showcases the true tropical beauty of New Zealand hops.” – Dan Del Grande, Bison Brewing.

“The homebrewed version that Daniel and I chose to win the competition was the hoppiest Pale Ale that I’ve ever tasted. I can’t wait to taste the final product.” – Dr. Bill Sysak, Master Pairings and Expert Drinking. And coming from a man that has tasted over 30,000 beers in his lifetime, this statement should not be taken lightly.

“During the judging process, the statement was made that there is not a commercial pale ale in the craft beer market that is better than this beer.” – Stephen Johnson, New Brew Thursday.

Zeal Island Pale Ale will be a competition entry at the Great American Beer Festival, not as Pro-Am, but as a commercial entry from Bison Brewing. It will also be served on the convention floor at the Bison Brewing table, alongside its other organic beers.

As with all of Bison’s Limited Seasonal Releases, Zeal Island Pale Ale will only be available on draft in select markets. For all sales and media inquiries, please contact [email protected]

Founded in 1989, Bison Brewing from Berkeley, CA has been proudly dedicated to brewing 100% Certified Organic craft beers since 2003. Bison’s current owner and brewmaster, Dan Del Grande is a leader of sustainability in both the craft beer industry and his local Bay Area community. When he’s not in the brewery, Dan enjoys visiting local organic farmers markets, cooking, practicing yoga & karate, hiking, playing with his dog, and truly embodying the conscientious lifestyle for which Berkeley has become known.

Andrew Bell is a 24-yr old BJCP certified judge from Los Angeles who first caught the “craft beer bug” his freshman year of college in Dallas, TX through online beer enthusiast sites, primarily Ratebeer.com. His foundation for fermentation science started with making ciders, and Andrew has been brewing beers frequently since that time. Andrew has been brewing all grain for 3 years, and while qualified to judge to style, he rarely finds himself brewing to style. Like many craft brewers, Andrew brews what he likes, which generally these days are sours and West Coast (i.e lean, mean, dry) hoppy beers. Andrew considers himself a beer enthusiast/geek first and a [home]brewer second.