(DENVER, CO) — On Thursday, August 2, the Trademark Trial and Appeal Board (TTAB) ruled that Comrade Brewing Co. LLC could register its “Superpower” as a trademark for beer, shooting down a challenge filed by the company behind POM Wonderful and Fiji Water. This came with the ruling that consumers will not confuse a juice called “Antioxidant Superpower” with a beer called “Superpower,” rejecting the argument that the two types of beverage were closely related for trademark purposes. 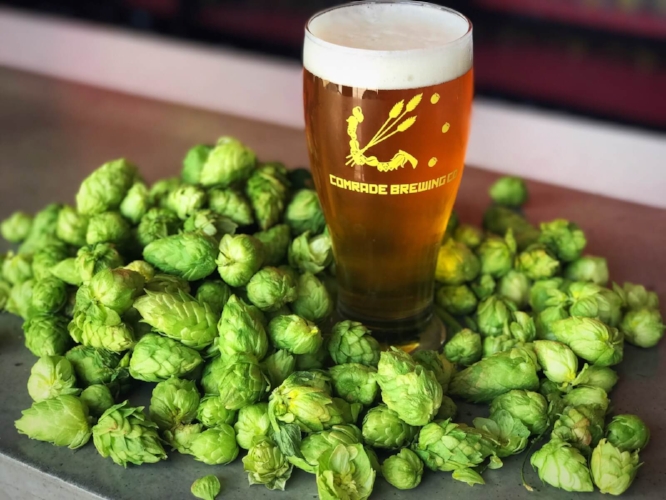 In past cases, the board has held that wine and spirits are closely related to beer in the minds of consumers, but it said The Wonderful Co. had failed to show that a soft drink such as fruit juice had the same kind of connection. “Simply put, opposer has not submitted sufficient evidence that consumers are accustomed to encountering these goods under the same mark,” Judge Peter W. Cataldo wrote for a three-judge panel.

Comrade Brewing has been brewing its flagship Superpower IPA since they opened in 2014, and have since won silver medals at the 2014 and 2015 Great American Beer Festival® for their wet-hopped versions of this beloved Colorado IPA.

The Wonderful Co. uses “Antioxidant Superpower” as a slogan for its POM Wonderful pomegranate juice. It has had the phrase registered as a federal trademark for fruit juices since 2003.

“Particularly in light of the differences between the goods but also because the two marks had key differences in appearance,” Cataldo wrote, “the board sided with Comrade Brewing.”

“The result is what we expected and contended from the start,” explains Comrade Brewing owner David Lin. “We’re pleased with the result and appreciate the passion and efforts of our lawyers at beerattorney.com in defending this matter.”

Comrade Brewing has filed for the ‘Superpower’ trademark with the United States Patent and Trademark Office and is currently waiting for approval.

“Operating this brewery has thrown us a lot of curveballs,” explains Lin. “If I’m being completely honest the potential confusion between antioxidant juice and craft beer was more surprising to me than the day someone crashed their truck through our front door. We’re going to laugh this one off over a couple of Superpowers.”

Superpower IPA is an American IPA with loads of Pacific Northwest hops that lend huge pine and grapefruit hop aroma and citrus flavors. Its bitterness is balanced with a crisp, light malt character. Superpower is on tap year-round at the Comrade Brewing tasting room.

For more information about Superpower IPA, or with questions about this TTAB ruling, email [email protected]

Launched in 2014 by David Lin and Marks Lanham, Comrade Brewing is often noted as one of Denver and Colorado’s masters of the India Pale Ale style, home of the flagship Superpower IPA. Comrade also brews the World Beer Cup® winning Yellow Fever Chile Beer, the Koffee Kream Extra Coffee Milk Stout, and the Redcon Irish Red Ale year-round, as well an array of rotating seasonals and lots of collaboration beers with fellow brewing companies. Comrade’s trophy case now sports silver medals from the 2014 and 2015 Great American Beer Festival® and a 2016 World Beer Cup® gold award, among others. Find the brewery online at comradebrewing.com.

Beerattorney.com is a Drumm Law brand, focusing on meeting the legal needs of craft breweries, including trademarks, business law, distribution, licensing, among other areas. Learn more about the Beer Attorneys at beerattorney.com.