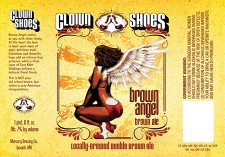 “We are opening up Philly and it’s suburbs this week and will be opening full distribution in Georgia soon (we are currently only available at Total Wines). As our capacity increases this summer we will be looking for more markets to open full distribution in. We more than tripled our output from 2010 in 2011. We were well over 3000 bbls compared with well under 1000 in 2010.”

In regards to having their own facility instead of working out of Mercury Brewing, “nothing yet, we love working with Mercury Brewing and are excited to move into their new facility with them.  The new Ipswich Ale Brewery (Mercury) will have an attached restaurant featuring taplines from Ipswich and all the beers brewed at Mercury. This is the closest thing we will have to being ‘our’ restaurant. Hopefully we can open a Clown Shoes tasting room in the not-so-distant future.”

When asked about the possibility of canning or other new products: ” Yes there’s been (canning) discussion! Hopefully at some point in 2012. We will introduce 3 new 6 pack beers by summertime (an IPA, a Pale Ale, and a Porter).”