(CINCINNATI, OH)– The Christian Moerlein Brewing Co. will be introducing their popular 15 Can Brewer’s Pack in a new Variety Pack edition. 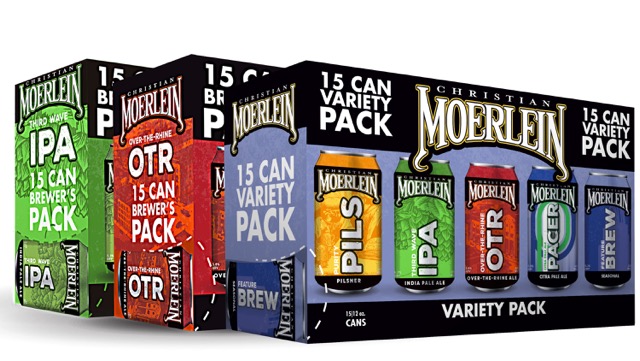 The Moerlein Variety Pack features 5 styles of beer including a rotating seasonal feature brew. Explore the variety of the Christian Moerlein portfolio with 3 cans each of: Third Wave IPA, OTR Ale, Pacer Citra Pale Ale, Purity Pils, and a rotating feature can.

The 15 can Brewer’s Packs are also available in Third Wave IPA and OTR Over-The-Rhine Amber Ale. All 15 Can Brewers Packs have a suggested retail for $17.99. The new Variety Pack will officially hit the market on March 15, 2017 and can be purchased at better beer retailers throughout Ohio and Kentucky.

The Moerlein Lager House, which opened in February of 2012 is located in the Smale Riverfront Park, has 28,000 square foot of floor space, a functioning 5,000 barrel capacity brewery with over 800 seats for diners, has two beer gardens that can handle an additional 600 guests (total capacity with beer gardens over 1,400), can produce 4,000 meals a day and boasts 360-degree views of the Cincinnati skyline including the Ohio River, Roebling Suspension Bridge, Great American Ballpark (home to the Cincinnati Reds) and Paul Brown Stadium (home to the Cincinnati Bengals). The Moerlein Lager House has become a premier destination for craft beer enthusiasts and is a tribute to Cincinnati’s grand brewing traditions and its famed 19th century brewer, Beer Baron Christian Moerlein.