Chickity-Check Yo Self: Beer for Breast Cancer

(San Diego, CA) – Thorn Brewing Co. is excited to announce the release of their new pale ale, Chickity-Check Yo Self. Just as important as it is to check the date code on your beer cans to ensure freshness, it’s even more important to check yourself regularly and to know your body. With 40% of diagnosed breast cancers being detected by women who feel a lump, early detection is key. 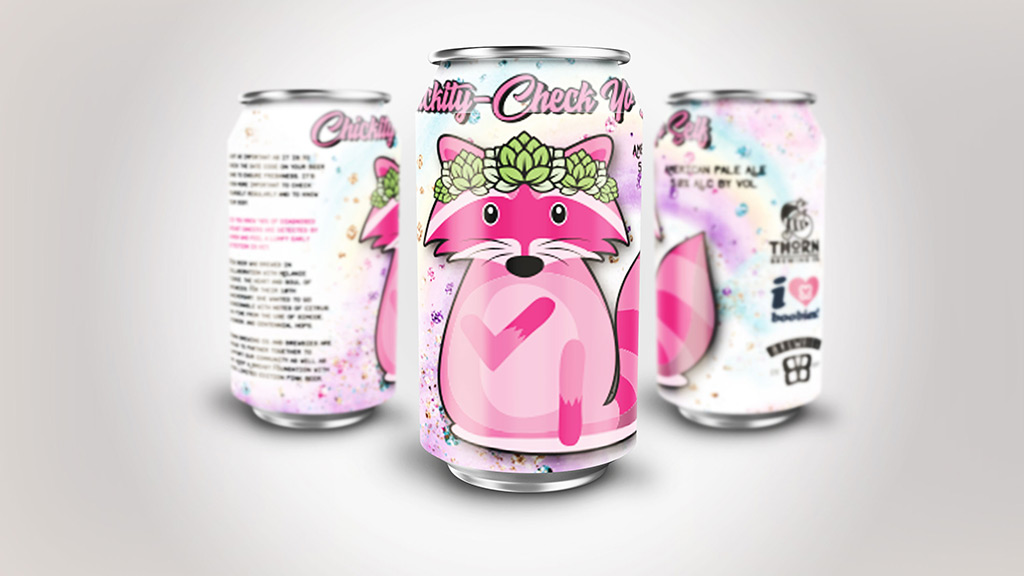 Chickity-Check Yo Self Pale Ale (5%) was brewed in collaboration with Melanie Pierce, the founder and heart and soul of Brewbies. The Brewbies Festival was founded in 2010 to raise money for Keep A Breast Foundation and also highlight the positive impact of the craft brewing community. For their 10th anniversary of the festival, she wanted to go with a sessionable beer with notes of citrus and pine from the use of Simcoe, Chinook, and Centennial hops. Thorn Head Brewer, Doug Pominville, was passionate about creating and brewing this beer. “We all have someone important in our lives that has been affected by cancer,” he shared recently. “Both of my grandmothers fought the good fight but in the end both of them were taken away by the big bad. This charity festival is very near and dear to my heart and a portion of all the proceeds from this beer will benefit the Keep A Breast Foundation. Please join me in raising a pint for all of our loved ones who are battling, those who have won, those who have lost the fight and yell, ‘f*ck cancer!’”

Thorn Brewing Co. and Brewbies are proud to partner together to support our community with this limited-edition, pink beer. Available in both cans and on tap starting January 29th, $1 per six-pack and $1 per pint will be donated to Keep A Breast Foundation.

About Thorn Brewing Co.
Thorn Brewing Co. started out in 2012 in North Park as Thorn Street Brewery where they became known as San Diego’s ultimate neighborhood brewery. Now, their Barrio Logan produces their beer on a 30-barrel system and offers 16 rotating taps and a full lineup of exciting events at their tasting room.