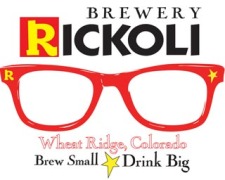 We’re a week away from GABF 2014. Find out what Colorado Brewer, Brewery Rickoli is bringing for tasting at the 2014 Great American Beer Festival. Stay tuned for more breweries, and head over to ‘Headquarters to find out what many more breweries are sending to Denver. Cheers!

Brewery Rickoli will be pouring the following beers as well as entering them in for judging at this years GABF:

Elke Brown    6.8% ABV     45 IBU  Elke Brown is named after Ricks mother, Elke, a longtime lover of beer.  This is a full flavored American-style Brown Ale with an array of medium to dark caramel malts.  It is just accented with English chocolate malt which gives it a full-bodied sweetness that cradles the Willamette hops used throughout this brew.

Truly great things get one name; Zeus, Madonna, and we can’t forget Gilligan.  Monolith is our American Imperial Stout that will create beer dreams.   Aged in Bourbon Barrels for over 6 months, the Oak and Bourbon impart a beautiful blend with this Imperial Stout.  Large, black and formidable, Monolith.

SOHO Braggot    7.5% ABV    22 IBU  SoHo Braggot is a collaboration brew we did with Golden Honey Bees! It’s where Saison meets Mead, meets Berliner Weiss!  We brewed a Saison, made Mead, and blended them in the fermenter.  The sour comes from spontaneous fermentation of the wild yeast and flora in the local honey.  This beer has a unique sour-sweet balance that still showcases the Honey.

Oats McGoats was originally a collaboration brew with Boston Beer Co., – Samuel Adams, as Winners of the 2013 Brew the American Dream program they offer.  It is our Rye Stout with the addition of oat malt and Golden Naked Oats.   The added oats lend a smoky earthy quality.   We also used a new hop (7270) that still awaits naming!  It imparts a subtle wintergreen aroma over the roasty malt bill.

A trip to insanity and back!  We created a brew where insanity was the requirement.  Over loaded with a variety of American high alpha hops and crafted with a slightly toast malt bill to help balance the incredible alcohol punch this brew delivers. Yeah, we know….

We will be offering a GABF taster flight of all 5 of the beers we will be entering in the GABF for a special price of $5 during the entire week of GABF – Monday – Saturday.

We will also be contributing a “special brew” to the KROC World Beer Forum for a fundraiser that they do each year. KROC is a homebrew club – Keg Ran Out Club….