Cape May Brewing Lady in Room #10 Bottle Sale This Weekend

(Cape May, NJ) — Cape May Brewing Company is pleased to announce the latest release in their widely-acclaimed Barrel Aged Series: Lady in Room #10, a sour brown ale aged in red wine barrels for eighteen months on black currants and plums releases from their Brewtique at 1288 Hornet Road in the Cape May Airport on Saturday, October 21st. 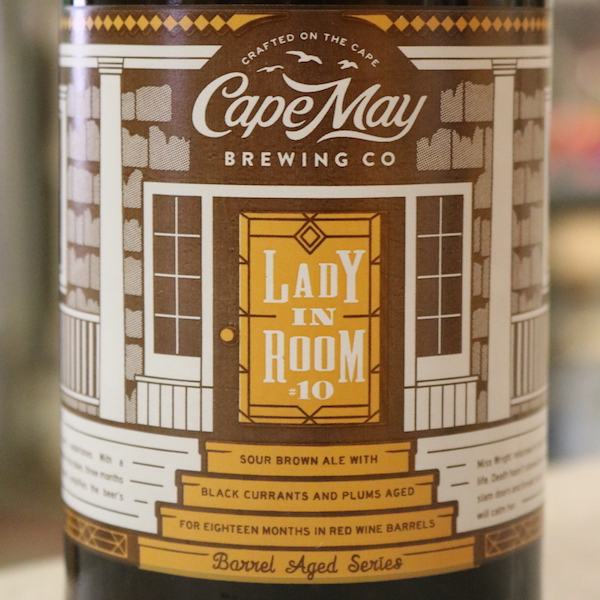 “Our Barrel Aged Series is one of the most forward-thinking and innovative things we’ve done as a brewery,” said Ryan Krill, CEO and co-owner of Cape May Brewing Company, “and Lady in Room #10 is the culmination of nearly three years of experimentation, ingenuity, and creativity.

“Our Barrel Aged Series has lead to some of our most well-received beers to date, and we’re certain that Lady in Room #10 will exceed all expectations.”

Lady in Room #10 is barrel-aged autumn splendor. This limited release was lovingly crafted over the past year-and-a-half, hand-bottled with care in a gorgeous 750ml bottle, hand-dipped in wax, and bottle-conditioned to perfection. Lady in Room #10 has an assertive malt character balanced by its rich, jam-like fruit flavors, the brew’s sourness remaining front-and-center while being well-rounded by the oaken and vinous character provided by the eighteen months spent in red wine barrels with a delectable helping of black currants and plums.

“You get the black currants and plums up front with this rich jam-like quality,” says CMBC Head Brewer Brian Hink. “There’s an underlying maltiness due to the base beer, the barrel’s character is present, the sourness is front and center, but it quickly lets the other aspects shine through, this really is a fully-painted picture.”

Black currants, not particularly well-known in the United States, are a tart and juicy berry popular in Northern Europe.

“I was first introduced to black currants when I lived in the UK,” says Director of Brewing Operations Jimmy Valm. “Black currant flavor is similar to blackberries, but more acidic. This is why we chose it for Lady In Room #10: we wanted to bring out the acidic notes of the base beer more, but by using a fruity tone to achieve that as opposed to more sour notes.”

Like an explosion of fall colors in the turning leaves, the result is a symphony of flavors in complete harmony with one another, well-rounded, balanced, and with a depth of character you won’t find elsewhere.

Named for one of Cape May’s many famed ghost stories, Miss Wright returned to her beloved room #10 at the Hotel Macomber each summer, bathed in perfume and talking up a storm, with her trusty steamer trunk in tow. Death hasn’t stopped her return, and she joins the numerous specters at the Macomber in haunting room #10.

This limited offering releases October 21st from CMBC’s Brewtique at 1288 Hornet Road in the Cape May Airport, just in time for Halloween. A special sixtel of Lady in Room #10 will be tapped in the Tasting Room, with brewers available from 12-3pm to discuss CMBC’s barrel-aging program.

“Grab a few bottles and see for yourself,” Hink says. “I doubt you’ll be disappointed.”

For more information on Cape May Brewing Company, including for tours and tastings, see capemaybrewery.com or call (609) 849-9933.