(Cape May, NJ) — Cape May Brewing Company is pleased to announce that, due to consumer demand, they’ve begun packaging two of their flagship beers — Cape May IPA and Coastal Evacuation Double IPA — in aluminum cans for release on June 29th. 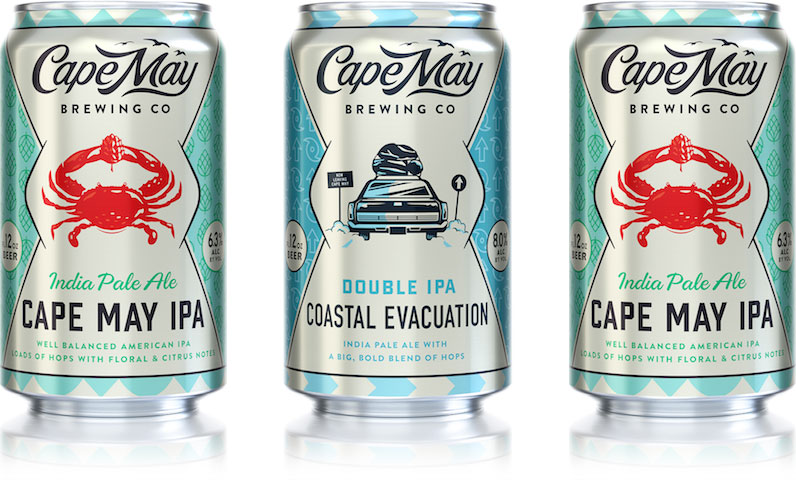 “This is entirely about our fans,” says CMBC co-founder Chris Henke. “We’re giving them what they want. If people weren’t asking for it, we wouldn’t be doing it.”

Glass bottles, long the standard in beer packaging, have slowly been overtaken in popularity industry-wide by aluminum cans. The craft beer market has determined that cans are more portable, lighter, more environmentally friendly, and keep the beer fresher for a longer period of time.

“Now our fans who want to take our beer where glass isn’t allowed can do that,” Henke says. “If they don’t want to bring glass on their boat, now they can bring our cans on their boat. Not too many of our beaches allow alcohol, but none of them allow glass.”

Aluminum cans are a better option for beer drinkers who enjoy outdoor activities, as well. Their ease of portability make them a strong choice for hikers, campers, and other outdoors enthusiasts.

“After you drink a can, you can crush it up and put it in your pack out bag,” Henke says. “It’s a little more difficult to pack out a bottle.”

CMBC prides itself on being an environmentally-conscious company. They recycle their spent grain to local farmers as feed, they source local ingredients as frequently as possible, and have constructed their current bottling line from scrap materials. Being lighter, cans require far less fossil fuels to ship.

“Delivering the empty cans and delivering the full cans, we can fit more on a truck,” Henke says. “We’re reducing our carbon footprint, just on the shipping side alone.”

A six-pack of cans weighs about 2.5 pounds less than if that same amount of beer were in bottles, equating to a ten-pound difference in weight per case.

Furthermore, according to Slate, the average American beer can contains about 40% recycled materials, while the average bottle contains about 20 to 30%. However, the energy savings when aluminum is recycled are far greater than they are for glass — 96% vs. 26.5%.

“Freshness has everything to do with oxygen,” says CMBC Director of Brewing Operations, Jimmy Valm. “The more oxygen contained in a bottle or can when the beer is packaged, the shorter the shelf-life will be. Most newer canning lines are more efficient at limiting the amount of oxygen that is added to the can when it is filled, so the beer will stay fresher for longer in cans.”

CMBC isn’t completely foregoing bottles in favor of cans. Some of their brands will continue to be bottled, including the 750ml bottles that package their highly-acclaimed Barrel Aged Series.

Regardless of the benefits of aluminum cans, many consumers still associate cans with the metallic taste they remember from the 70s and 80s. Most aluminum cans are now coated on the interior with a polymer coating that eliminates the metallic flavor in the beer. Others associate canned beer with an inferior product.

“We craft breweries are changing all that,” Valm says. “Cans are the it thing now, and they will be for a long time.”

To the CMBC fans who feel as if they’ll miss drinking from a bottle, Henke has a simple solution.

“Pour it into a glass. You won’t know the difference.”

For more information on Cape May Brewing Company, including for tours and tastings, see capemaybrewery.com or call (609) 849-9933.